Some days you train your legs and lungs. Today we trained our liver.

We left 11:30 ish and rode 2 km to Cafe Abseits. We all ordered a Mönschambacher Lager and a Schnitzel Sandwich. Then Gerhardt, the proprietor came out and sat with us. He said he had a bunch of beers he was waiting to taste with us an came back with literally a case beers (German case of 20). We protested that we had a long ride ahead of us but we did try a few...
First was Burgdorfer IPA from Switzerland. The brewer there is the former head brewer at Weyermann so it had some strong similarities to the Weyermann IPA -- namely a huge malt presence (not unexpected for a Malting company). It was a very drinkable beer.


Next up was a Gose from Bier Zauberei of Austria. While it was a tasty beer, I thought it wasn't sour enough for a Gose. I'll find out on Thursday when we arrive in Leipzig -- maybe my memory is wrong.

Then closer to home Gerhardt brought out a bottle of Barrel Aged Franken Ale from Drei Kronen in Schesslitz. This is the beer that was originally called "Franken Pale Ale" that was aged for 8 months in a red wine barrel (the "Pale" was dropped because the beer became very red). I'm usually not a fan of barrel aged beers but this one worked. There were lots of fruity notes that I'm guessing came from the wine. It was bottled into corked champagne style 750ml bottles for a nice presentation as well.


We were going to hit the road but were talked into a Schnitt of the beer of the month, Andy Gänstaller's Rauchmärzen. Like all of Andy's beers it was excellent, fitting in between Spezial and Schlenkerla is color and smokiness.

Finally we pried ourselves away from the beer and got back on the bikes and rode to Memmelsdorf, where we stopped at Braurei Drei Kronen. They had four beers on draft: the usual Zwickel Pils, Kellerbier and Stöffla (rauchbier) and a seasonal Wheat beer. 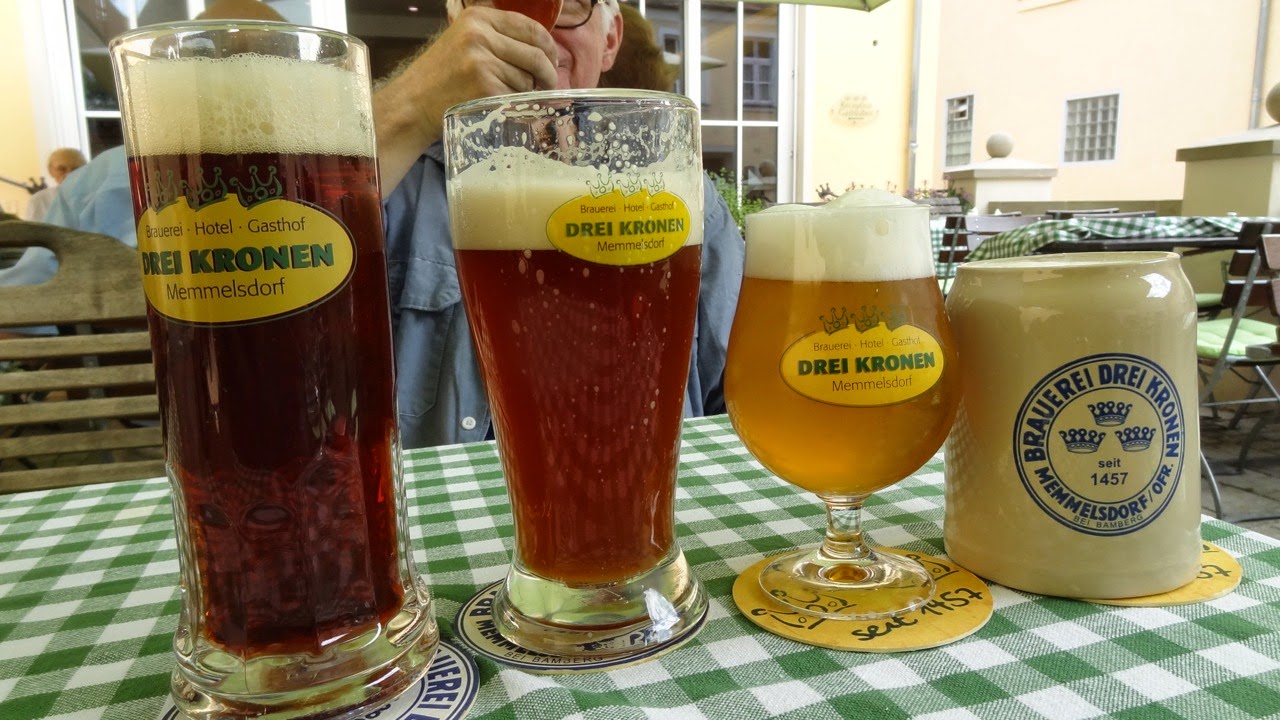 All were fine. The wheat was a little on the bland side for me but I'm guessing that was the intention. We all agreed the Zwickel Pils was the best of the bunch.

Next we headed up the hill to Merkendorf, home of Brauerei Wagner and Brauere Hummel. We went to Wagner first. Their biergarten behind the pub was open, so we headed there. It was a nice garden, benches and trees and fairly quiet. 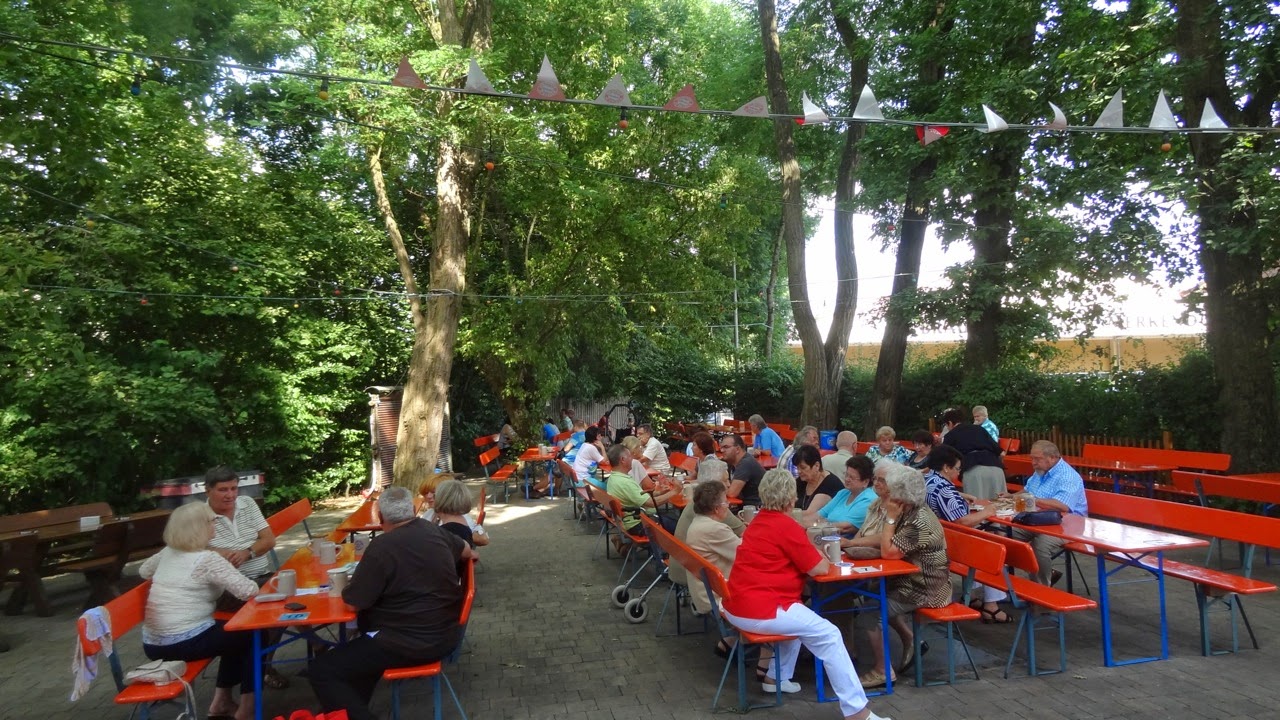 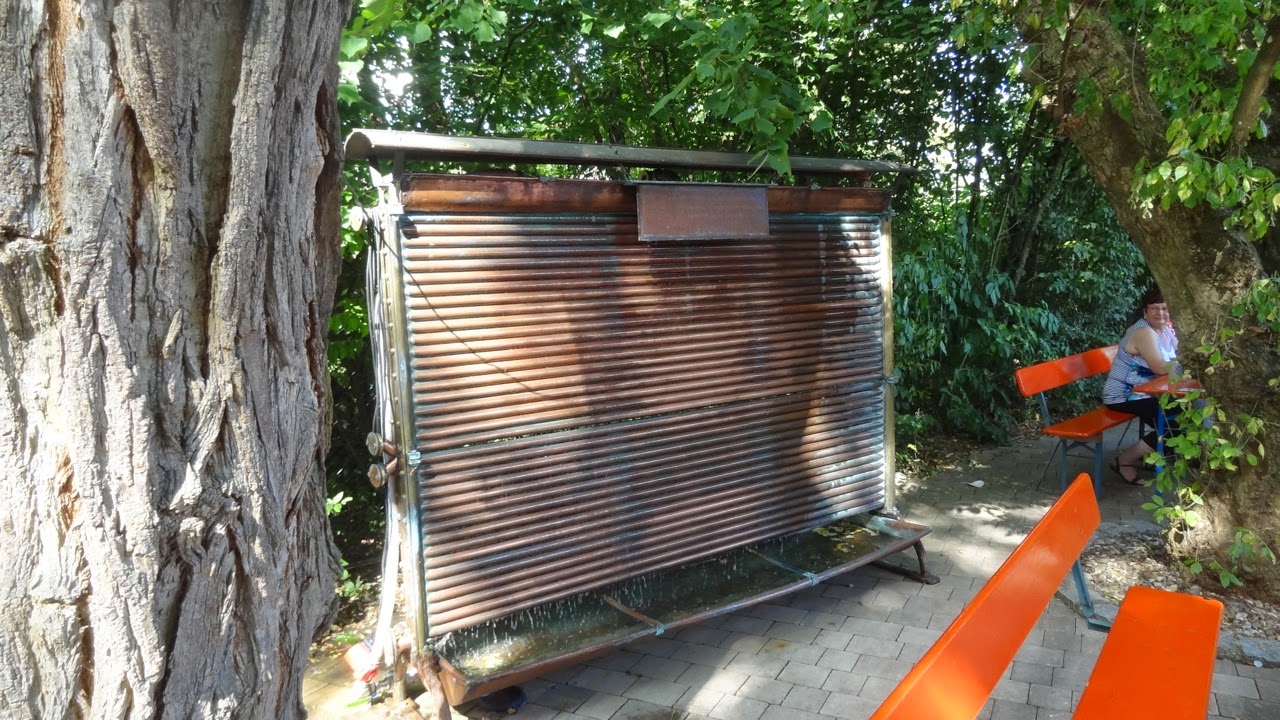 They had four beers on draft: Pils, Lagerbier, Jubiläumsbier and a Weizenbier. I got the Weizen, the others the Pils and Lager. All were good but again the Pils was the best of the bunch (I'm noticing a trend here...). Bob and I had the Pils for round 2 and Tom the Jubiläumsbier. The Pils was still the best. 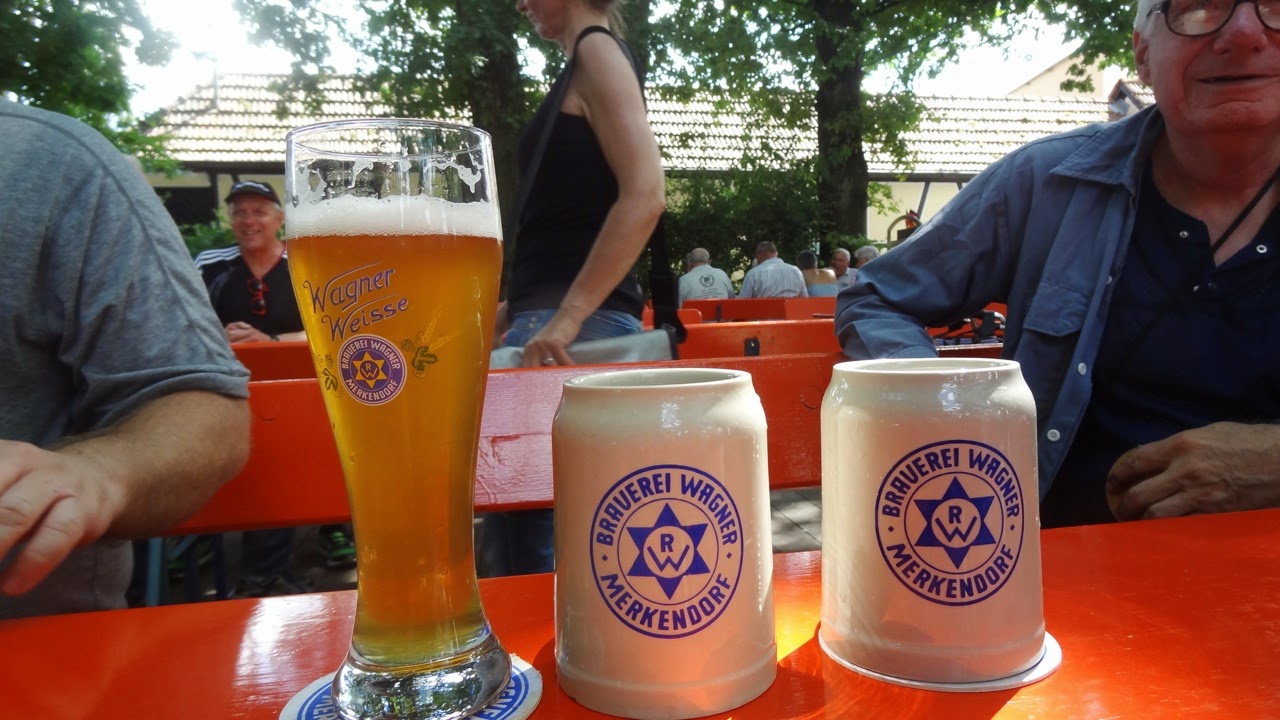 It was hard to leave but we had another brewery in town and rode the 500 meters to Hummel. Hummel always has a huge number of beers on draft (I think eight that day) and we were in no shape to try then all. We went with the Pils, Kellerbier and the the Räucherla rauchbier. Again the Pils was the best, followed by the Kellerbier. We decided the 90+ degree weather was why the Pils were going down so well. 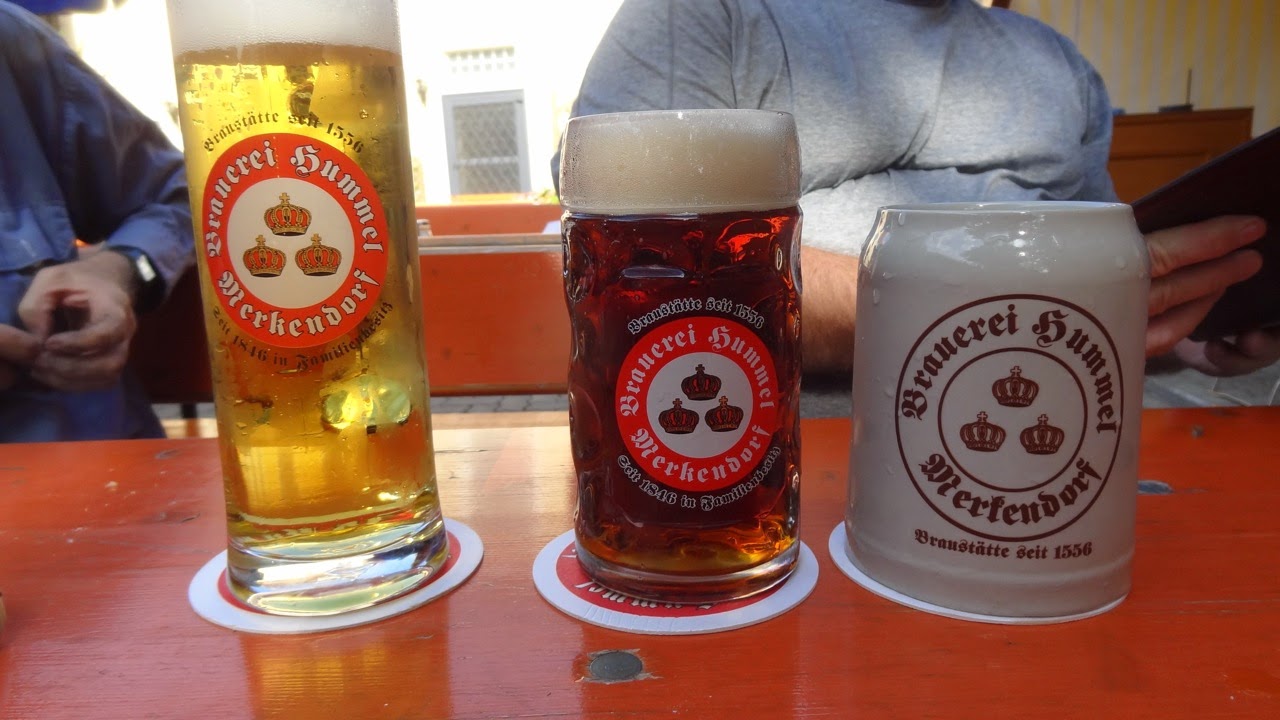 We headed back down the hill were we passed by Brauerei Göller in Drosendorf. Couldn't pass a brewery, could we? 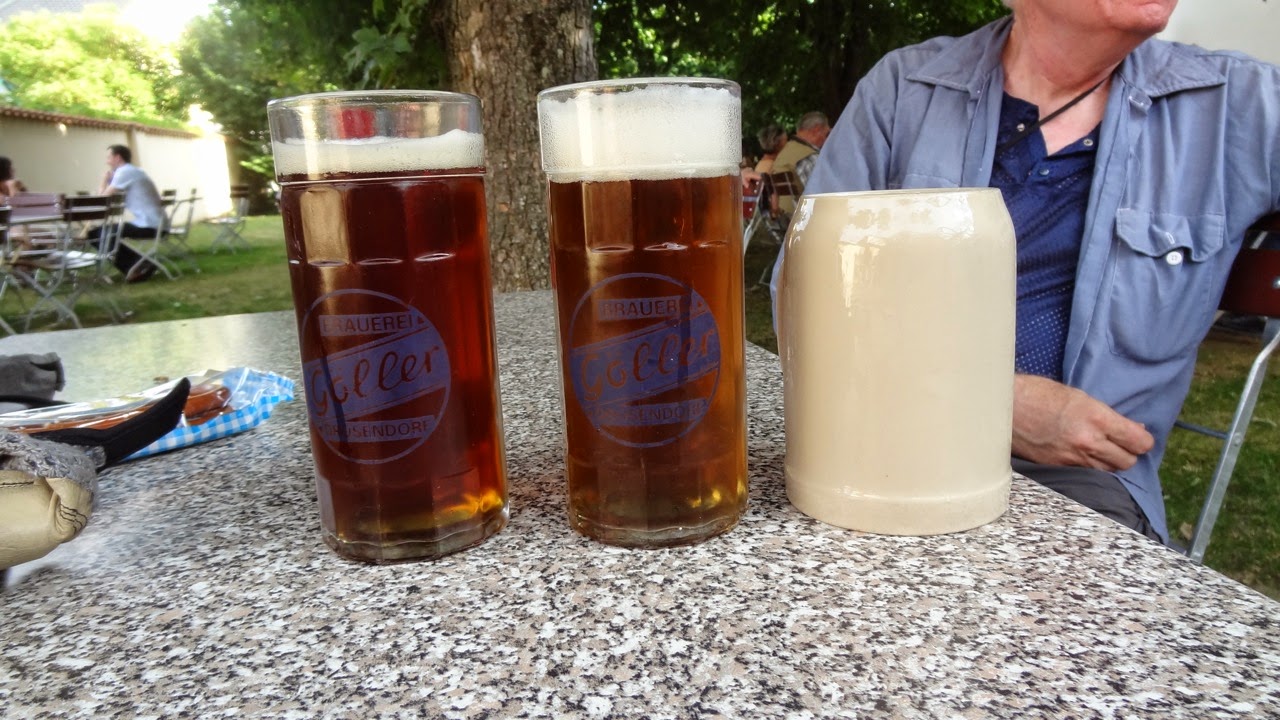 They too have a nice biergarten in the back. We ordered the Dunkel (lightly smoked), the (amber) Lagerbier and the Kellerbier. While all were drinkable, none really caught our fancy. It could be the heat and all the other beers but we didn't feel the need for another round and rode back to Bamberg (passing Brauerei Höhn in Memmelsdorf, proving we could pass one) and to Spezial were we had dinner a couple of beers.