We were a little worried as the map showed lots of forest in the morning. We've had some nice forest runs and some from hell.

This looked to be a nice one -- up and down a bit more than I like but all paved and well maintained. It was a road (i.e. cars allowed), which probably explains it. Occasionally they had what we've comes to call "Mecklenburg Speed Bumps" -- a short section left as really rough cobblestones. Luckily, over the years bicyclists have carved little bypasses in the dirt shoulders so they weren't too bad so long as you saw them.

Then came one downhill, in a really dark part of the forest when the road suddenly turned cobblestone. We got down the side dirt track but at the bottle (were it was hard to see) was just a gully with a bit of a drop. Needless to say, Bob lost another spoke (as often happens when you lose one, you lose the neighbor as it has more stress).

The bike was still ridable but no fast downhills and no rough surfaces. The nearest bike shop looked to be in Güstrow, about 20 km at this point.

We came out of the forest and were riding along fields of barley. Since I might be drinking this barley sometime in the future, I thought it polite to take a picture. 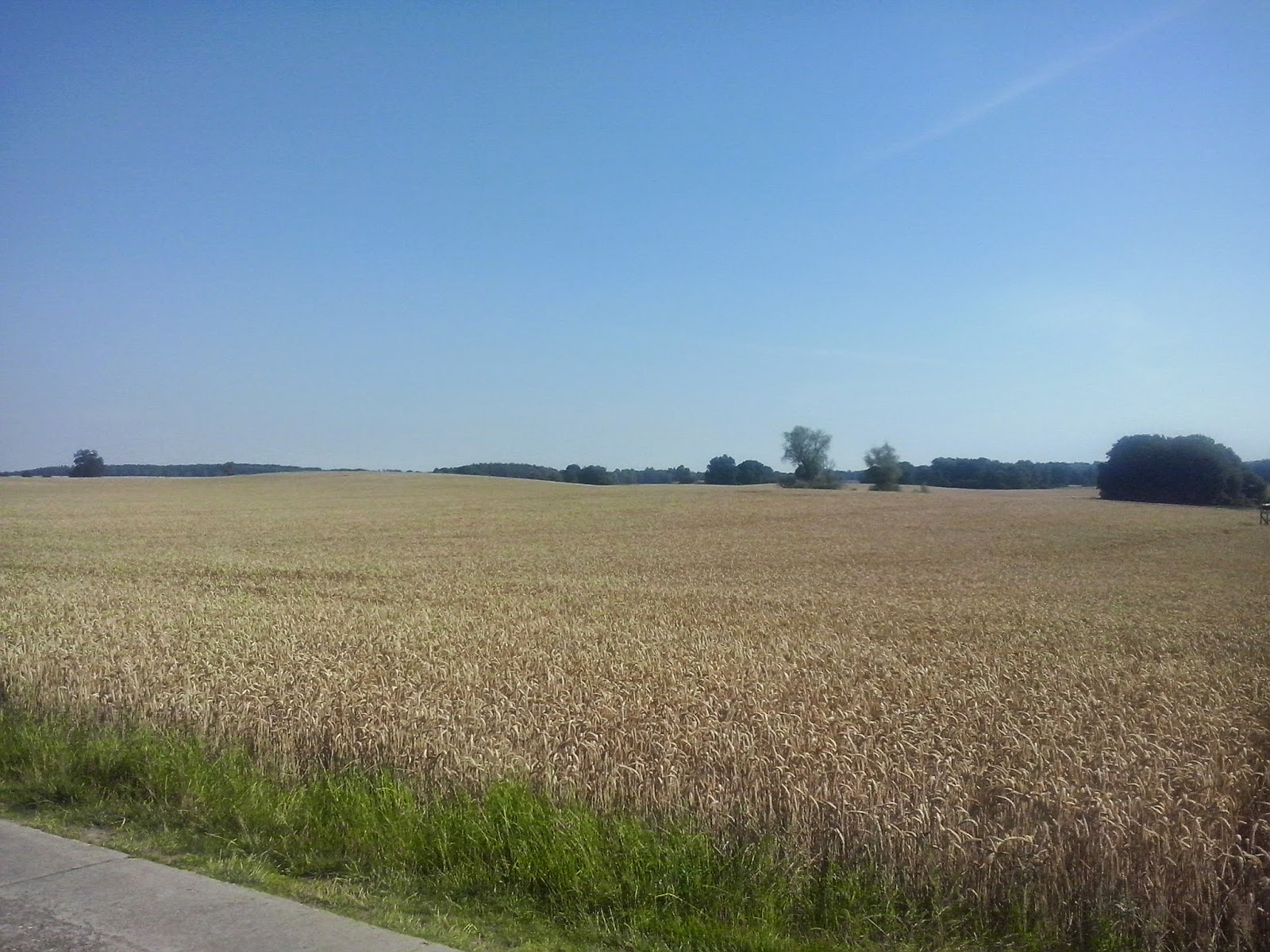 Off to one side we noticed a depression that had a number of trees planed in a circle, with a big one in the middle. With 12 trees around the circle we figured it was some kind of sundial. Or maybe a Druid shrine. 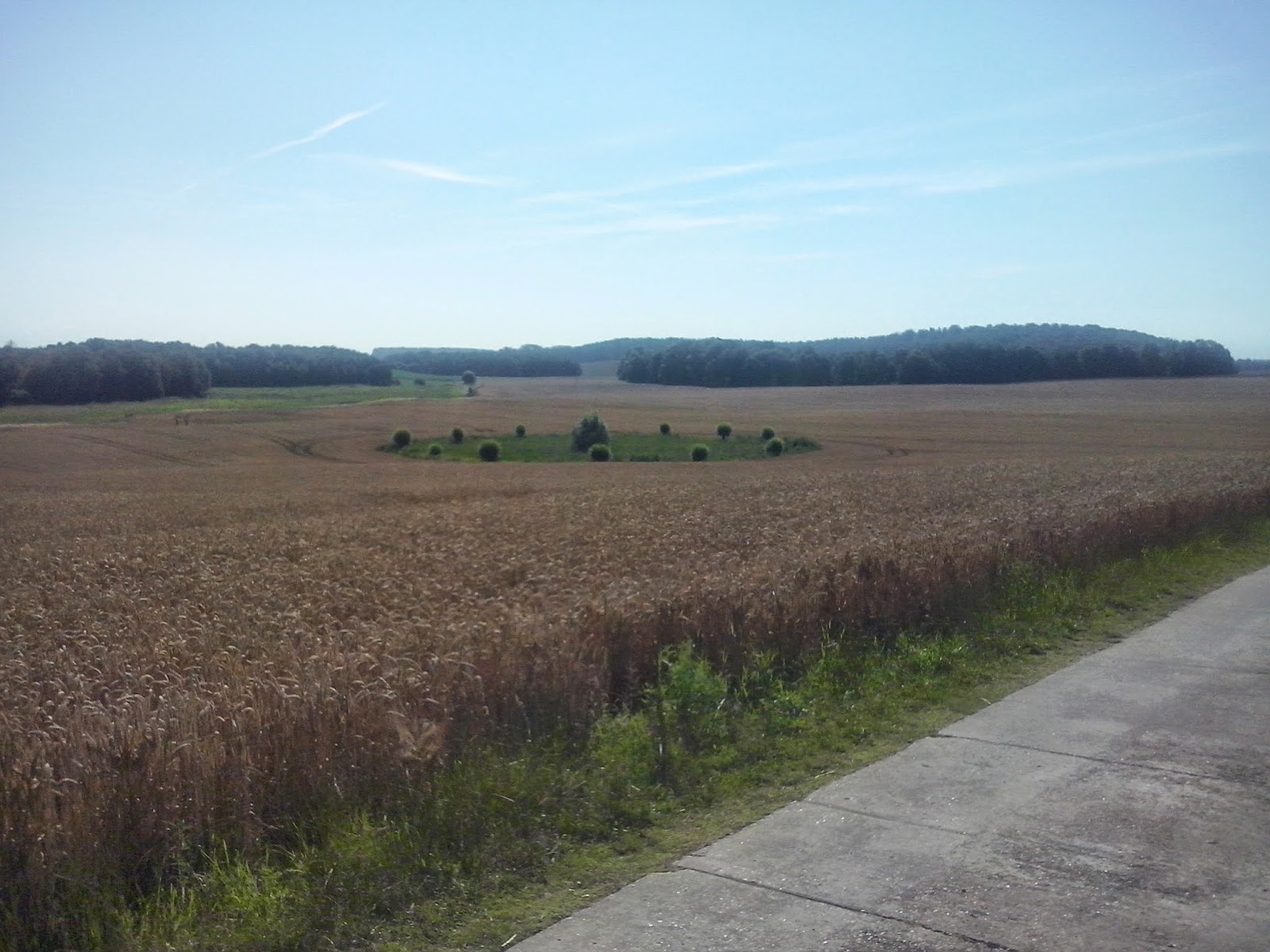 We came to Güstrow and the first bike show sign was down a cobblestone road, so I left Bob and went to search. They were closed for a holiday until Tuesday but I was told there were two others in town near the church.

Well, there were two old churches but we found the first shop. We took Bobs bike and the guy took one look and said no way did he have that size. But try the guy down the street.

Well, down the street was actually next door (must make things interesting). This shop had none of the glitz of the other. Stuff was piled all over and some looked to have been untouched for years. The owner came out and first said the spokes where just bent but then he acknowledged they were, in fact, broken. He shook his head, went into the back and came out with a gauge. He worked a broken spoke out the wheel, straightened it and measured it. Grumbling under his breath,  he went in the back and soon came out with two spokes and eyeballed them to the wheel. Grunting affirmatively, he took the bike into the back room and much quicker than we expected he wheeled the bike back out and said "All fixed, 10 Euro." As we left, he turned the sign in the door to "Closed." We had gotten in just before his Saturday closing time of noon!

I don't want to make the shop owner seem more sinister that he was -- he was perfectly friendly but he was the kind of guy who looked like he was more interested in bicycles than the idea of selling bicycles. Just the kind of guy you want to fix your unusual sized bike.

So now it was lunch time and the next town 20 km away so headed thru the town square and found a restaurant with a shaded table.

Soon we were back on the road. We were riding mostly along a canal and the temperature was rising. The weather app on my phone said it was 90 degrees in Güstrow and there was not a cloud in the sky. Bob said that this was a Florida sun, what was it doing this far north?

When we reached Bützow on our way thru town we passed an ice cream cafe. It was time to stop for something cold, so we did.  It was clear that we weren't going to make it the remaining 40km in the heat -- or at least arrive very late. So I checked the train schedules for the next town -- Schicewaan -- and in two hours there was a train to Rostock but then next one was two hours after that.

On a day not so hot we could make the train with no effort, but on a day not so hot we wouldn't need the train. After my experience yesterday I didn't want to push it. Then we realized -- why push our selves to ride 20km to meet a train that left about 2km from where we were sitting. So we ordered another ice cream and took the train from Bürtzow to Rostock. Wimps we were. Or rather, wimp was I as I think the others might have gone for it.

The bike car on the train was packed but we managed to fit the bikes in. But we had to stand. The horrors of standing for 20 minutes in an air-condition rail car versus riding 40km in the hot sun.

Once in Rostock we had about a 3 km ride to the hotel, near the waterfront.

The hotel had a fridge in the lobby and were selling the local mega brew Rostocker for €1.50. So it became our first beer in Rostock. 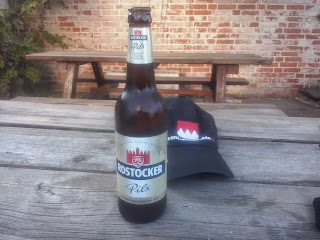 Somewhat refreshed, we headed for the waterfront and walked about a kilometer to a place called Zum Alten Fritz. It looked like it may once have been a brewpub but now they served the beers from the Störtebekker brewery in Stralsund (about 70km east of Rostock). 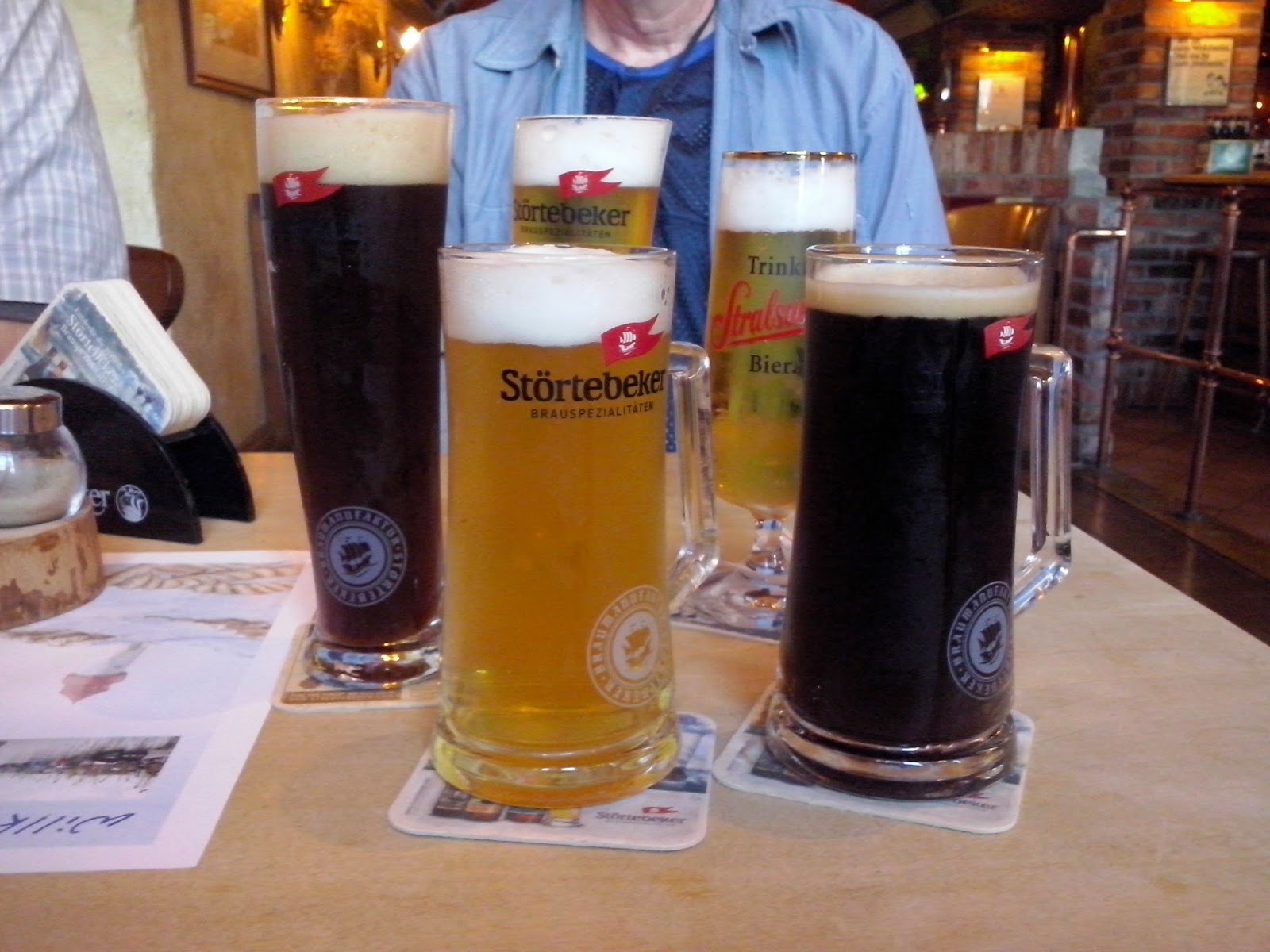 All were excellent, with the dark beers being especially roast, The second Pils (Stralsunder Pils) was a little on the bland side but I think that was a feature not a bug since the other was nicely bitter.

For dinner we all had a lamb burger with some kind of soft cheese on it. It too was excellent.

They had a number of bottled beers as well and we picked a few to try. 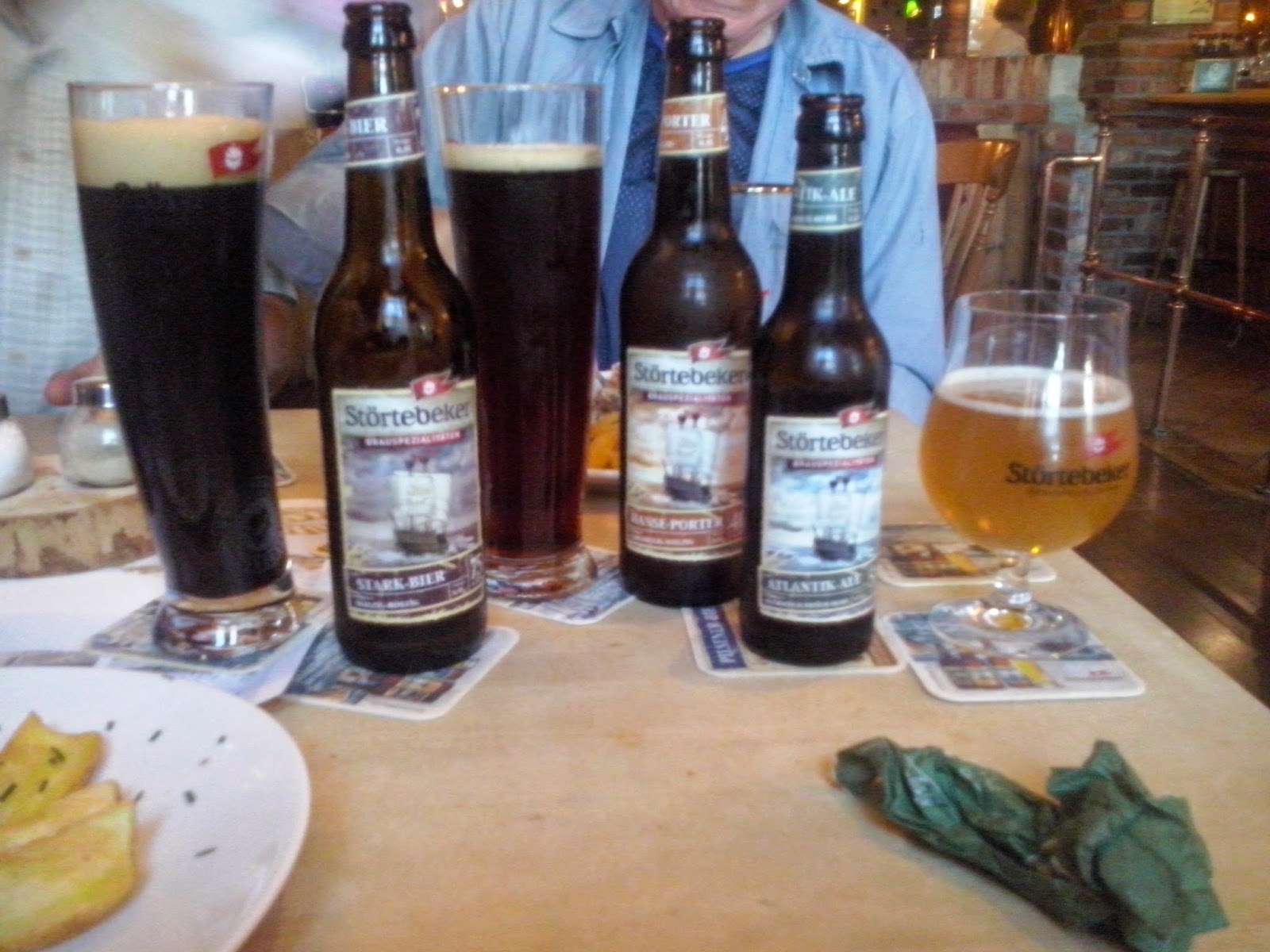 The Strong beer was very, very good. Nicely roast and a good malt background. Sort of a "Schwartzbock." The Hanse Porter was bottom fermented to you could rightly call it a "Baltic Porter" but it was a little on the sweet side and at 4% was lacking a bit of oomph. But tastily. The Atlantik Ale was a perfectly fine hoppy American Pale Ale (made with Cascade and Citra among other hops). Certainly the happiest beer I've had in Germany this trip.

They also had a number of wheat beers, which we did not try.

Walking back we had a nice sunset over the harbor... 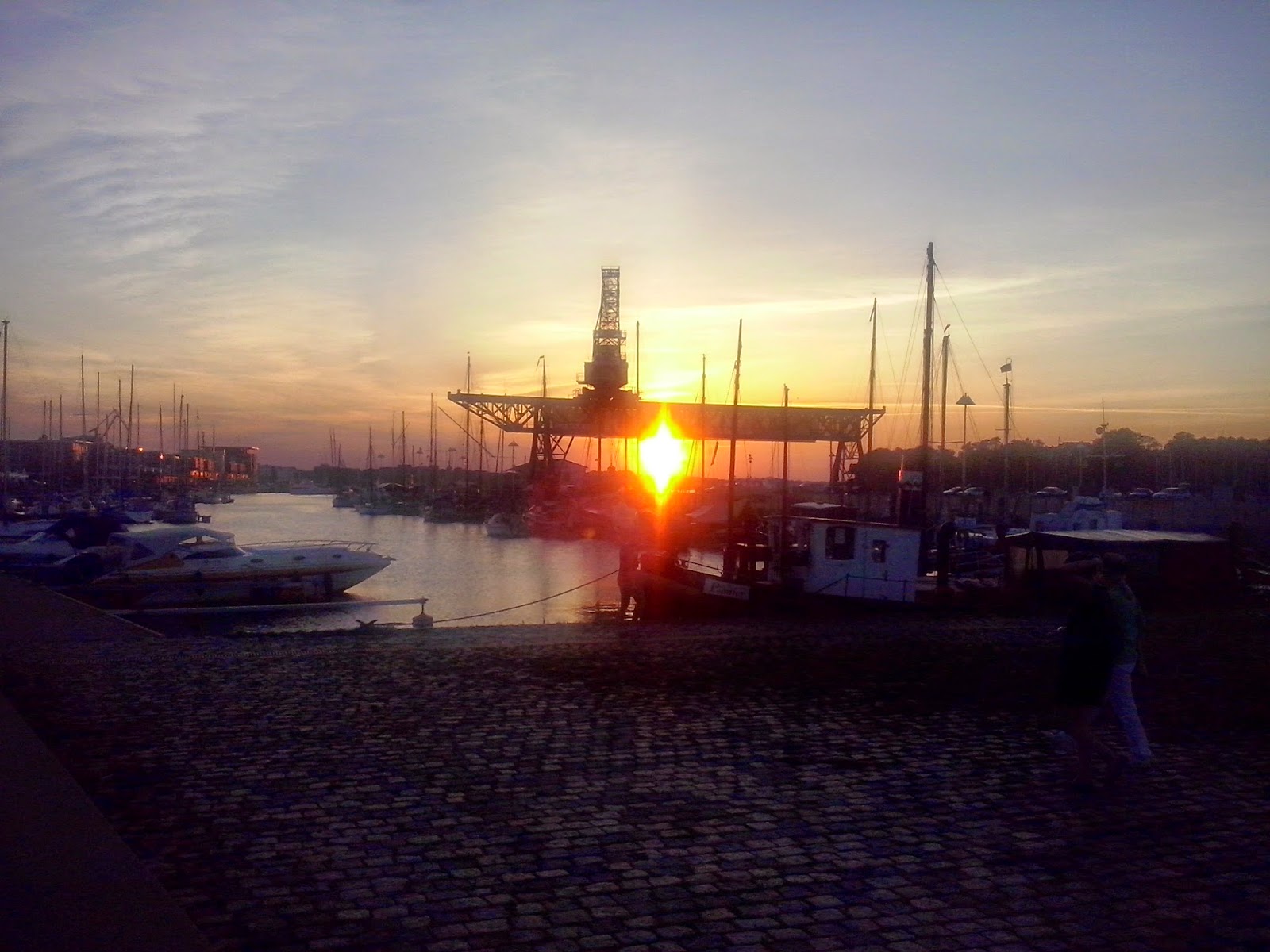 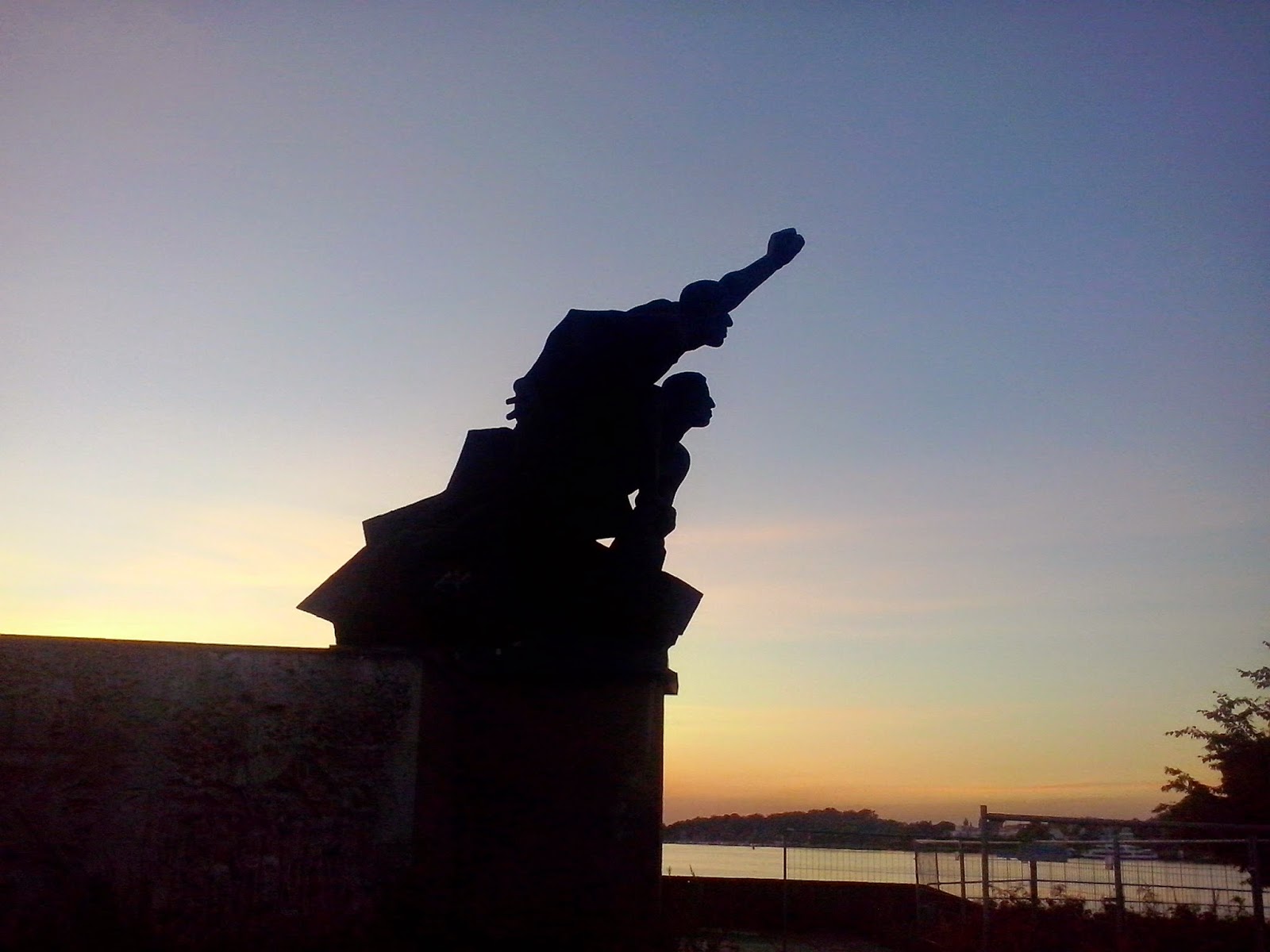 It was surrounded by a chain link fence and there was no mention anywhere of what it was or was commemorating. Probably will be a McDonalds by the time I visit Rostock again. 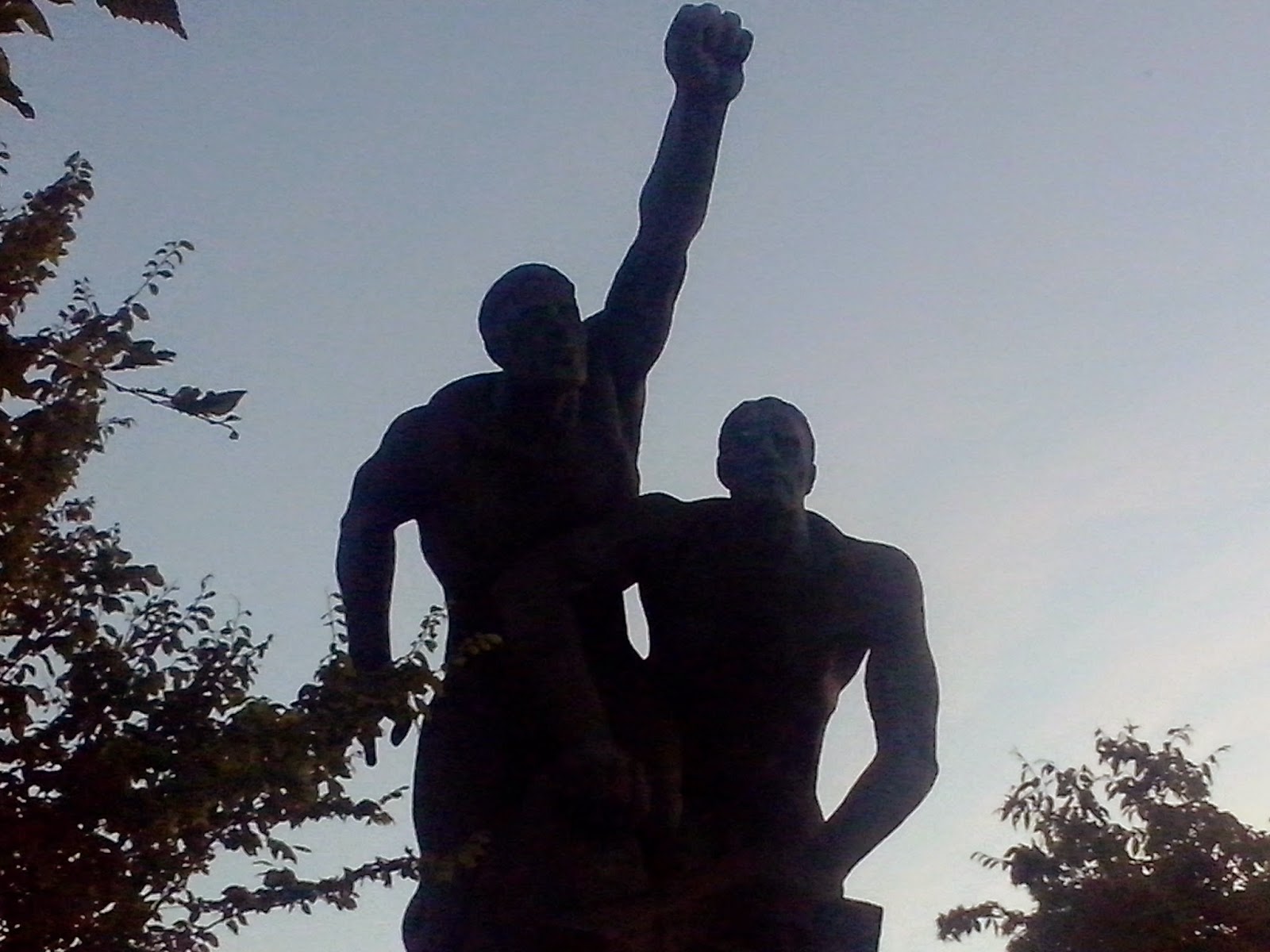 Rostock is actually a bit inland (as many good ports are). Tomorrow we are going to the actual coast.

Total distance ridden from Bamberg was just under 700 km
Posted by The Mad Brewer at 10:00 AM