"Gear"-ing up for the trip

This summers bike tour will require some new toys equipment, including some way to haul my stuff. I considered purchasing some standard bicycle touring panniers, but that seemed a little impractical -- even if I do a couple of these trips a year they'll sit in the garage most of the time.

I considered trying to use the Oyster Buckets, but that just isn't practical -- no easy way to get them on the plane.

Last year my father and I used a Arkel Bug but we didn't have much stuff to carry. The Bug is a convertible backpack pannier. When you take it off the bike you can unfold should straps and carry it like a backpack. I used it as my carry on on the flight over and back. It's a little heaver than a normal backpack because of the hardware to attach it to the bike rack, but not so much so to cause problems. It also has a nice pocket designed for a U-Lock and it has been on my bike pretty much all the time, except when I use the Oyster Buckets.

I considered buying a second Bug -- that would be plenty of space. But I really don't have the need of another backpack and it violates my idea of buying only stuff I'll use frequently.

Luckily, Arkel has another bag in their "Urban" series -- the Utility Basket. It is basically a big square-ish bag with a large opening and is designed to take a standard brown paper grocery bag. 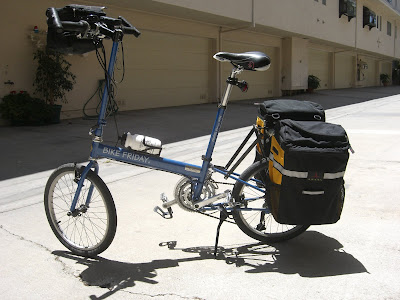 It does have some disadvantages compared to standard touring panniers -- other than a small pocket in the lid it is all one section -- many panniers have multiple compartments to make stuff easier to find. And the single top opening means that if what you want is on the bottom, they you have to remove all the stuff of top to get it. But I will get a lot more use out of these than touring panniers. I have been making regular trips to a local farmers market to by fruit and vegetables. These will hold a lot of veggies. With the price of gas north of $4/gallon, my Bike Friday has become my regular vehicle for trips to the grocery store -- except for Costco runs -- I still need motorized transport for that :)

After using the Utility Baskets for nearly a month I have some more insight:

Normal panniers usually have a bit of a cut out on the leading side to give you more heel clearance. The Utility Baskets don't, which means I have to put them father back on my rack. This isn't really a problem except going up a steep embankment where there will be too much weight it the back.

Also, the square shape and the fact they stick out a bit really does increase the wind resistance -- if riding into a strong wind (as we often get here near the coast) I can definitely feel the drag. Now I am not the streamlined myself so it probably doesn't matter that much.

If this tour goes well (which means I'll do more touring) then I probably will buy some more standard panniers for the next trip.
Posted by The Mad Brewer at 4:47 PM No comments: