This past Sunday was the latest installment of CicLAVia -- a day where bicycles take over a part of LA.

This one was "To the Sea" -- a ride from Downtown LA to Venice Beach, mostly along Venice Blvd.

Being closer to the ocean, we did it in reverse. The western half of Venice Blvd has a median, so they allowed cars going eastbound but no motorized traffic on the westbound lanes. It was pretty quiet for the first stretch. 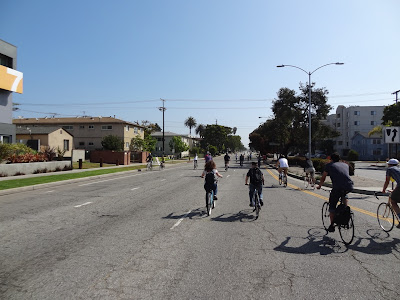 By the time we reached Sepulveda we had a pretty good sized pack.


Downtown was a zoo. There were thousands of bikes headed west -- no way we wanted to get messed up with that, so we hopped on the new-ish Expo line back to Culver City.

We got off at the end of the line, the Culver City Station. There is massive construction going on for the extension of the line, so bikes and cars were pretty backed up.


By the way, the white cars you see in the above photo are from the traffic wardens. 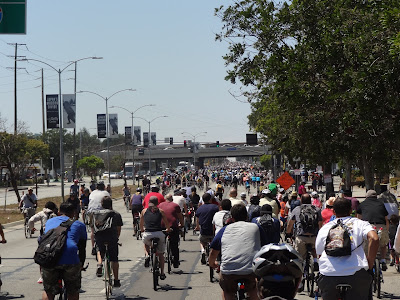 Going westbound just before Sepulveda -- the overpass is the 405 freeway.

The paper this morning said over 150,000 people took part. I can believe it -- Never have I seen so many bicycles. Everything thing from road racers to kids with training wheels. The only other Bike Friday was a tandem ("Two's-day") going the other direction.

They are doing it again in June, this time down Wilshire Blvd
Posted by The Mad Brewer at 9:39 PM No comments:

I finally got around to ordering a Brooks B17. 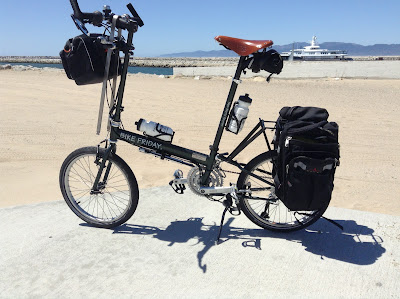 Looks great. I hope it soon feels a great as it looks. Made the mistake of going for a 10 mile ride in my usual cargo shorts. "Oh, that's where they put the seam" -- with the old padded saddle not such a problem. Live and learn

I am off to Bamberg for 2 1/2 weeks next month -- no major rides, just my usual brewery to brewery trips, weather permitting.
Posted by The Mad Brewer at 9:18 PM No comments: