Sorry for the pause in posting (not that anybody is reading this :) ) . I recently passed the 200 mile mark on the new bike. And I still love it. It is by far the best bike I've every owned. I did take it in to my local bike shop (LBS in internet-speak ) to get the cables adjusted and shift in much smoother now. In keeping with the tradition, I leave you with a picture of Friday on the Manhattan Beach Pier 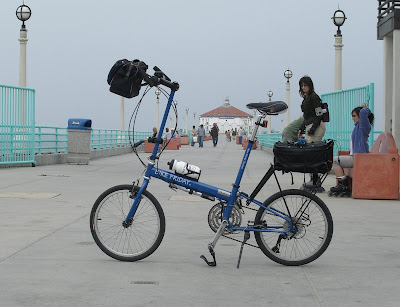 Friday at Manhattan Beach Pier
Posted by The Mad Brewer at 6:16 AM 1 comment:

The Real Test -- The Results

When I got to the airport (LAX) on Thursday they weighed the suitcase and it came to 48.5 lbs. Yikes, that is really closer than I liked.

At Terminal 2 (Northwest and others) at LAX after the agent puts the tags on the luggage you take it over to the TSA scanners. That means you can watch it go thru and see if they open it (and more importantly, see that that put it back together correctly). They didn't give it a second look -- out of the scanner and on to luggage belt. Knock on wood.

When I got to my destination (Atlanta) the first thing I did when the bag came off the carousel was to open it and spot check it. It looked like everything was there and in one piece. When I got to my folks house it took less than an hour to get the bike all back together. We managed to turn a minor problem on the rear brakes into a major deal before we realized what was wrong. It turns out the little "noodle" on the v-brake wasn't fully set and the brakes were rubbing. We tried just about everything before I noticed the noodle. So add that to your assembly checklist.

On the return trip packing went very smoothly -- about 30 minutes from start to finish. Having an extra pair of hands did help. I put some duct tape on the suitcase as extra insurance in case the lid popped open.

The first surprise was at the check in counter at Atlanta -- the suitcase weighed 45.5 lbs -- fully 3 pounds lighter than the outbound journey. Did I forget something? The only thing I could think of was the front wheel (the last thing to go in). A quick check showed it was in there (I worry about ovens and irons when I travel as well :) ) So somebody's scale is off.

When I got back to LA the first thing I noticed was a couple of turns of TSA tape in place of my duct tape! So I got the extra attention on way back. I quickly opened the suitcase and it look like all was well. Whew!

Anyway, this morning I put it all back together. First thing I checked was the rear "noodle" -- all was well. But rear brakes were rubbing again! Damn it. Turns out the rear axle quick release had come undone and the wheel was not quite centered. I don't know if I did it in packing/unpacking or if it was because of the TSA inspection. But add another item to the post suitcase check list.

All in all I was very happy with the packing and unpacking. A couple of friends, knowing my lack of ability with anything resembling a tool, made cracks about how it would take me 2-3 hours to assemble and disassemble the bike. I was happy to prove them wrong, but the credit goes to the Bike Friday engineers who designed it for klutzes like me.
Posted by The Mad Brewer at 4:08 PM No comments: