Day 1: Bamberg to Lichtenfels then Jena

It rained really hard all Monday night and into Tuesday morning. But by 9am it had stopped and the sky looked to be clearing somewhat, so we decided to go for it. (The alternative was to take the train from Bamberg to Jena)

So we loaded up and were on the road by 9:30am. We made a few small stops along the way to adjust this and that.


When we reached Breitengüssbach we stopped in at the "Little Hummer" brewery at Pension Karin, but nobody was about so no morning beer for us.

By 11am we were in Ebing, home of Schwannen Bräu so we stopped in for a beer. 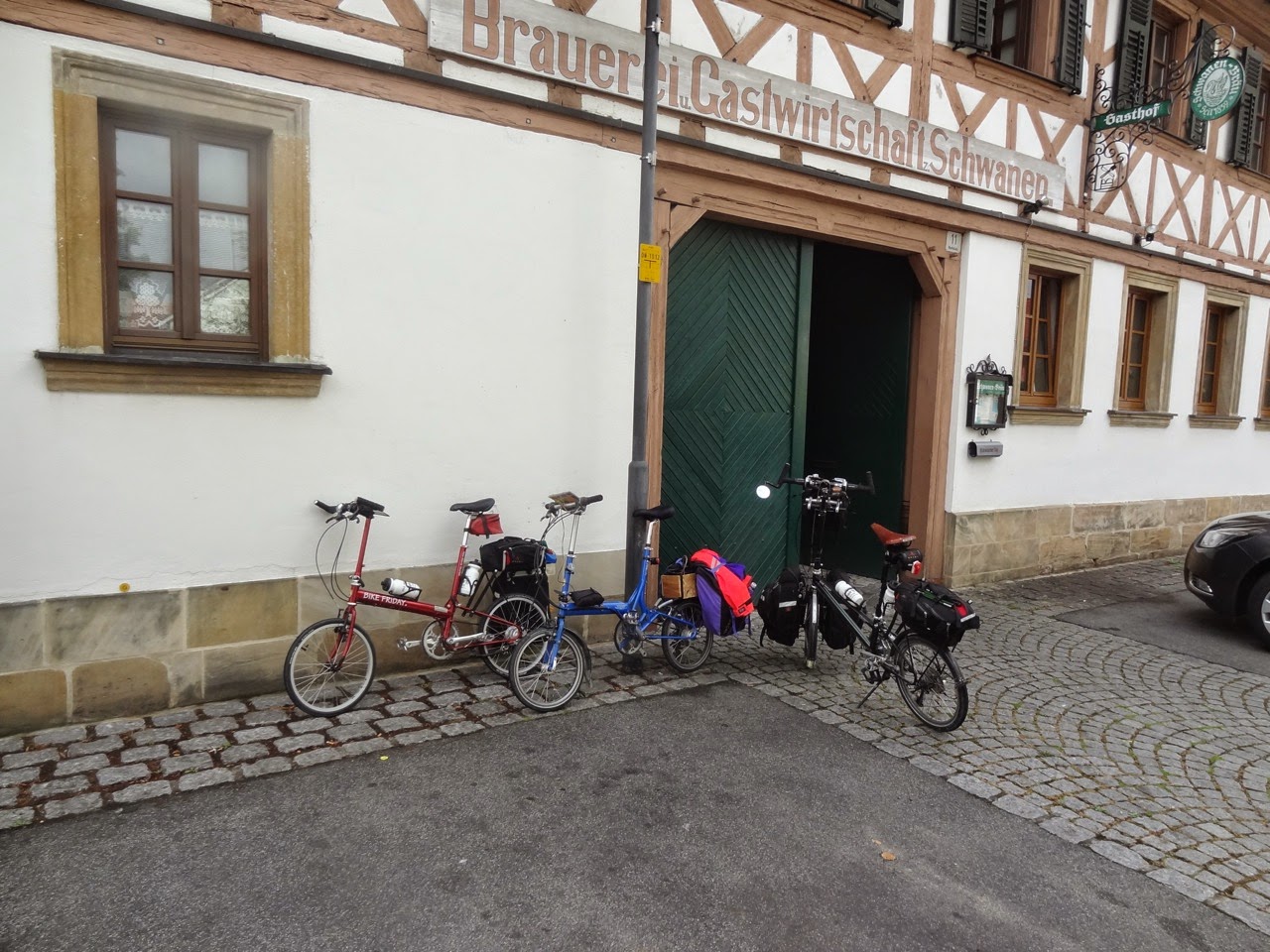 It was copper colored and the initial taste was of something different (but not unpleasant) -- a house yeast character, perhaps. Sometimes those flavors can build up so by the end of the beer you are tired of them but not so with this one -- I was as enjoyable at the end as it was in the beginning. 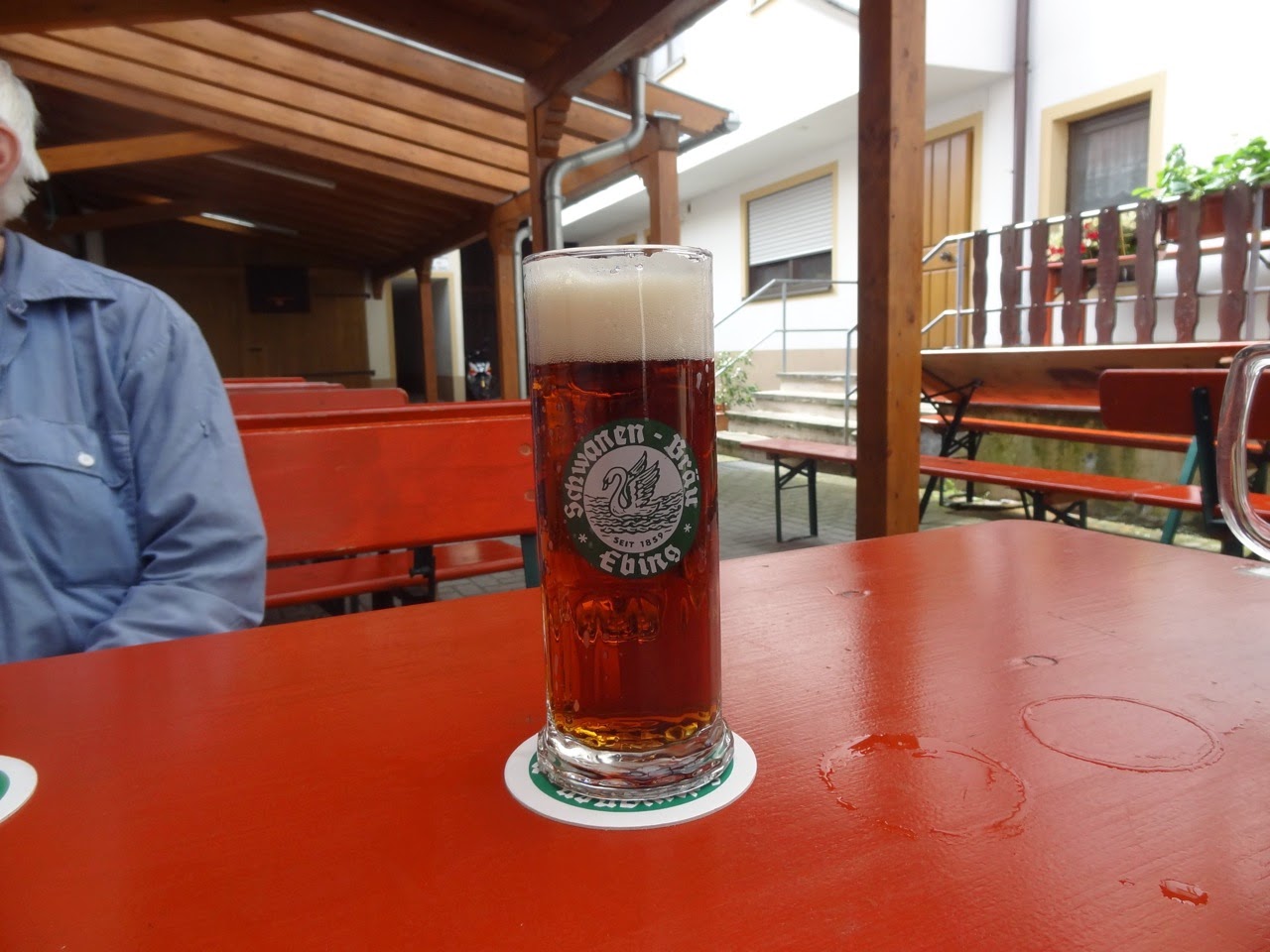 We pushed on because we wanted to catch the 2pm train from Lichtenfels. But here we had our first mishap. We continued down the same road we were on before we diverted to the brewery and soon we dead ended at a busy highway with no bike lane. That didn't match my research so we backtracked (uphill, unfortunately) to were the brewery turn off was and there, hidden in the trees, was sign pointing the bike path off north.

Just before Bad Staffelstein we came across this little rest area on the bike path. Since they had put in so much work in making it, we decided to use it for a short rest. It would have been rude not to have. 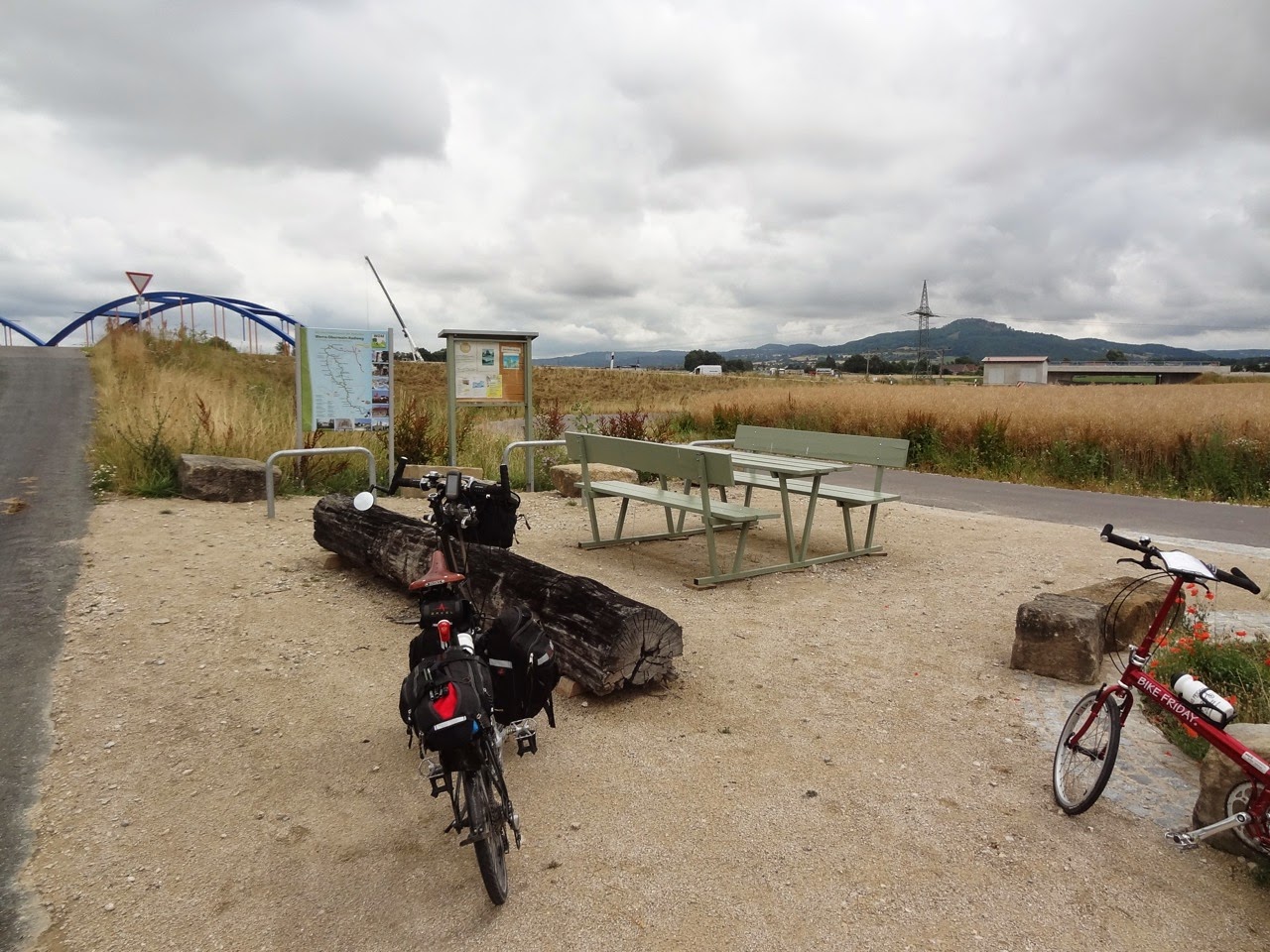 Here we had a temptation -- the bike path turned east but half a kilometer to the west was Wiesen and Brauerei Helmuth -- one I have visited a couple of times. If it weren't for the train we needed running only every two hours we would have made the small detour. But we were pressed for time so we pushed on.

Before long we were at the Lichtenfels train station with a half hour to spare. We grabbed a sandwich in the station and were soon on our way to Jena.

Once in Jena it was a short ride to our hotel, where to my dismay we were on the 4th floor (3rd, Euro style) with no elevator. Oh well, exercise.

After we were cleaned up a bit, we headed out (on foot) to Brauerei Papiermühle -- the brewpub in town. Directions on Google Maps said it was a kilometer but it ended up being over 2 -- which wasn't so bad but it had started raining quite heavily so we were thoughorly soaked by the time we got there. 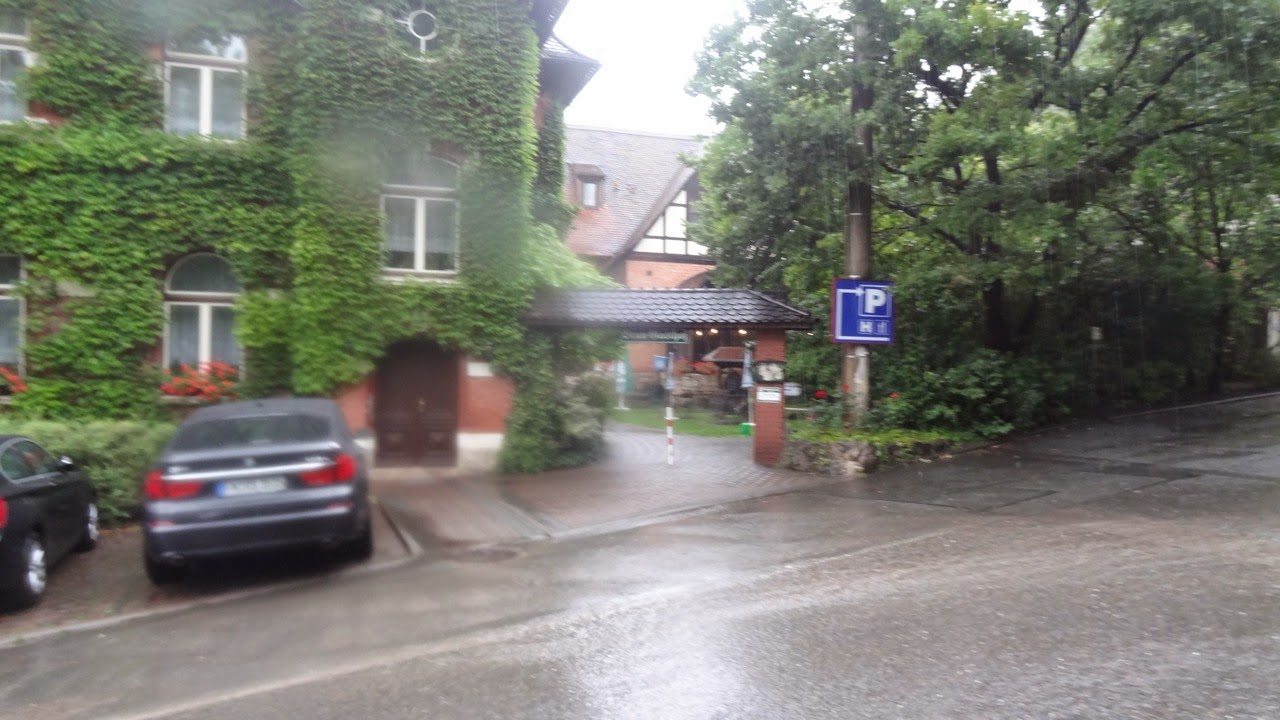 On the way in the had a sign for "Wöllnitzer Weisse" which was good news. This a delightful sour wheat beer brewed in a tiny pub brewery just outside of Jena. I have visited a couple times, on quick stops on my way to or from Leipzig. 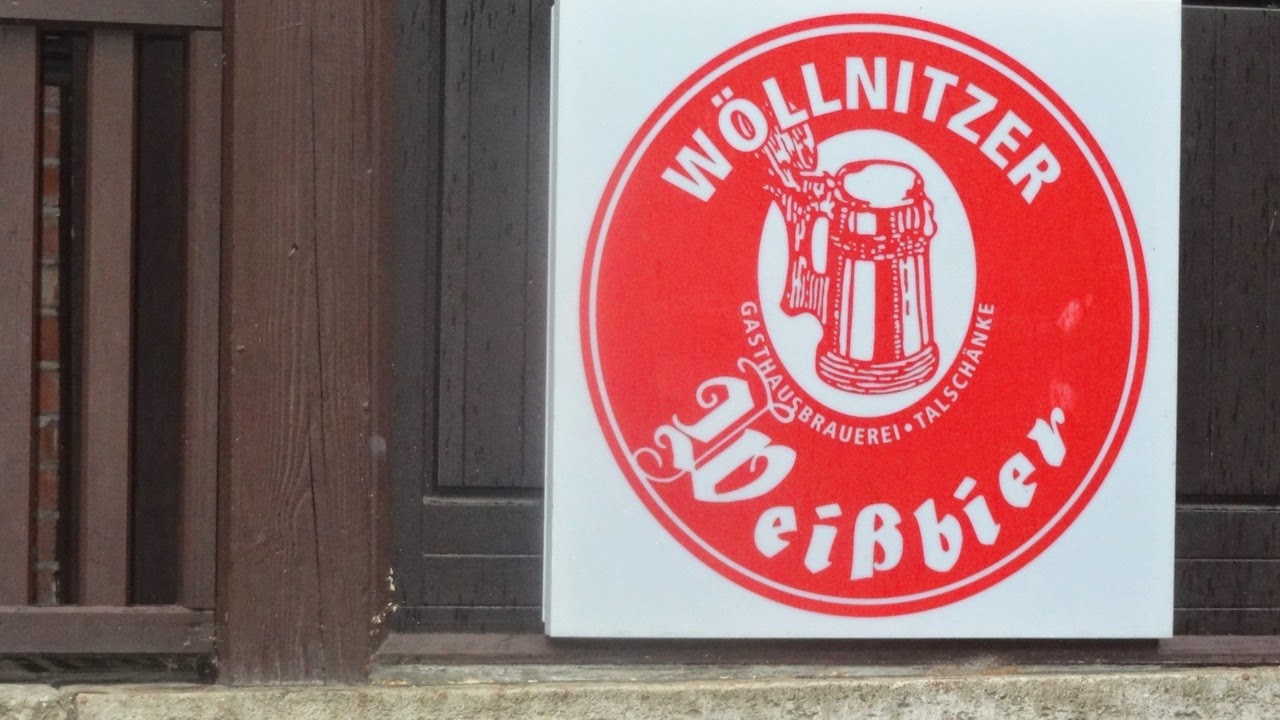 Once inside we saw they have 5 beer of their own: A Pils, a Dunkles, something called Birschenpils, Alt Jenaer (a pale-ish bock) and Schellenbier (a darker bock). We ordered a small (.3 l) of each. 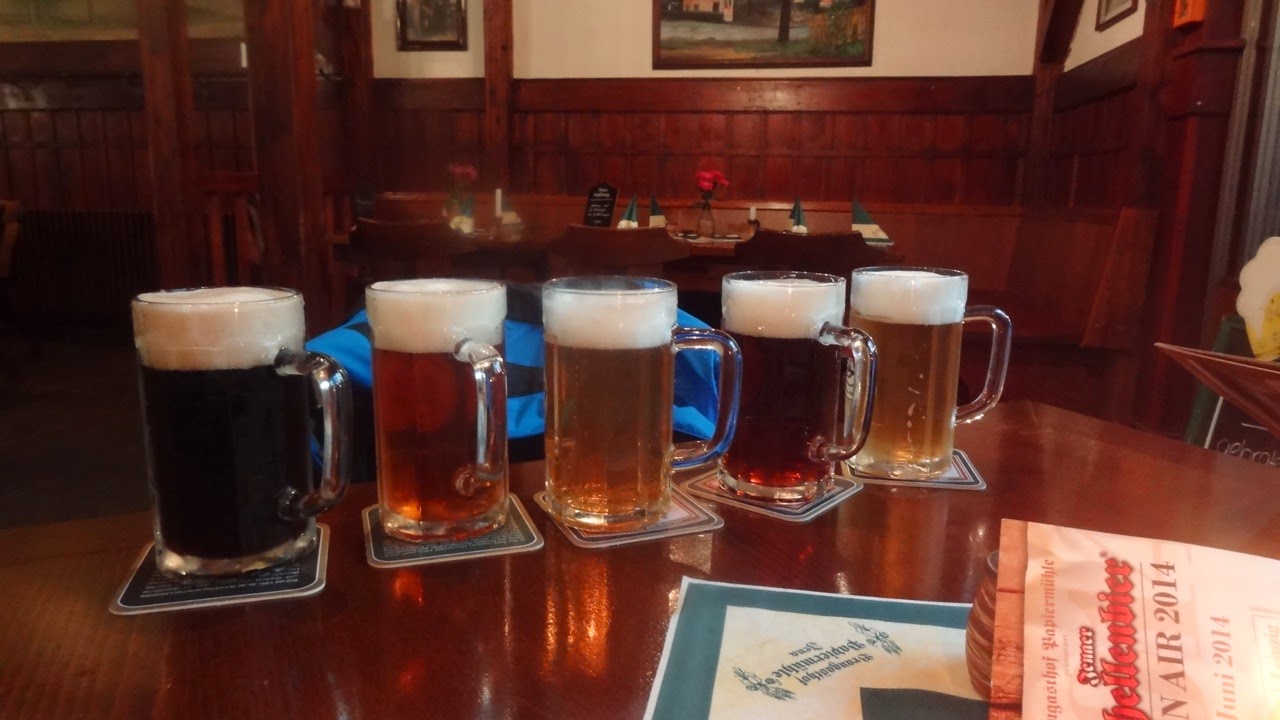 The Pils had quite a bit of diacytal and we only finished about half of it. The Dunkel had a bit less and was more butterscotch-y and so it was drinkable. We all thought the Birschenpils and Schellenbier were the best and we all ordered a .5 l of the Schellenbier with dinner. 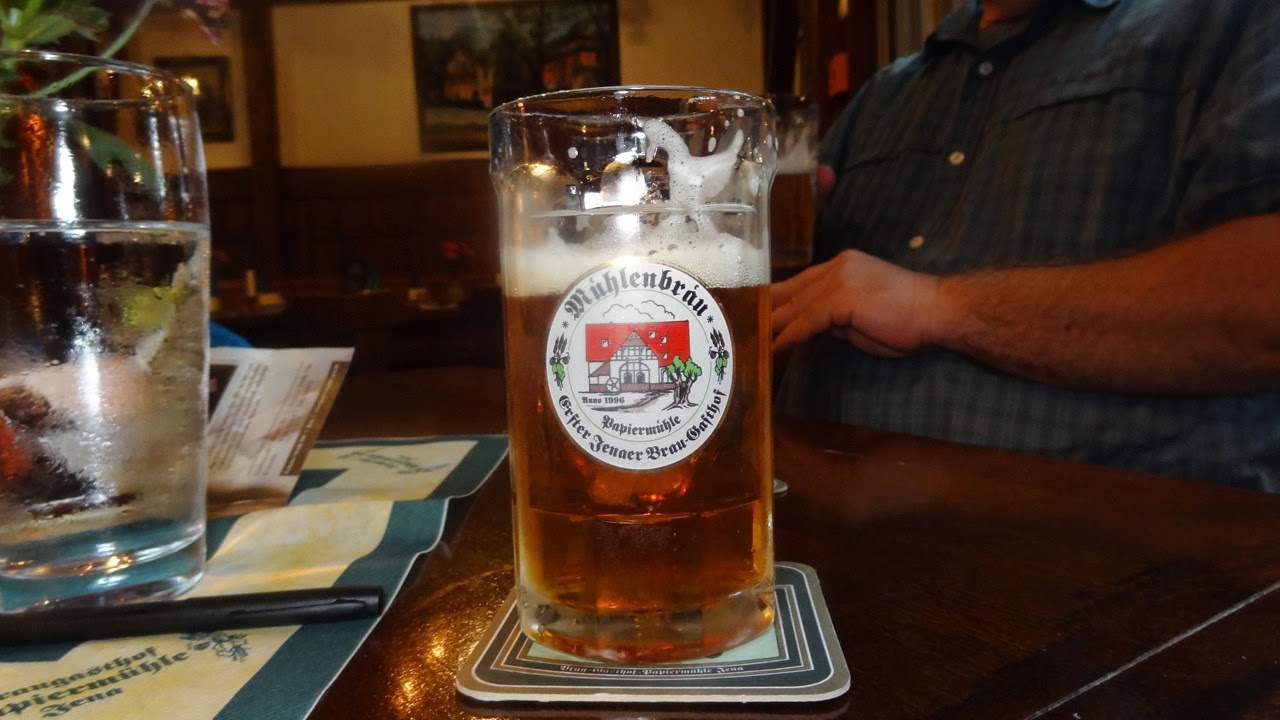 The food was wonderful, really much better than the beer.

For desert we decide to have a Wöllnitzer Weisse. It turns out it was on draft - I was expected bottles -- and they were having some foaming issues so it took a bit to pour our beers.

I don't know if was because it was draft, whether the beer has changed in the 3 years since I've had it or whether it is just my memory but it didn't seem as sour as I had remembered. It was still very good, though. 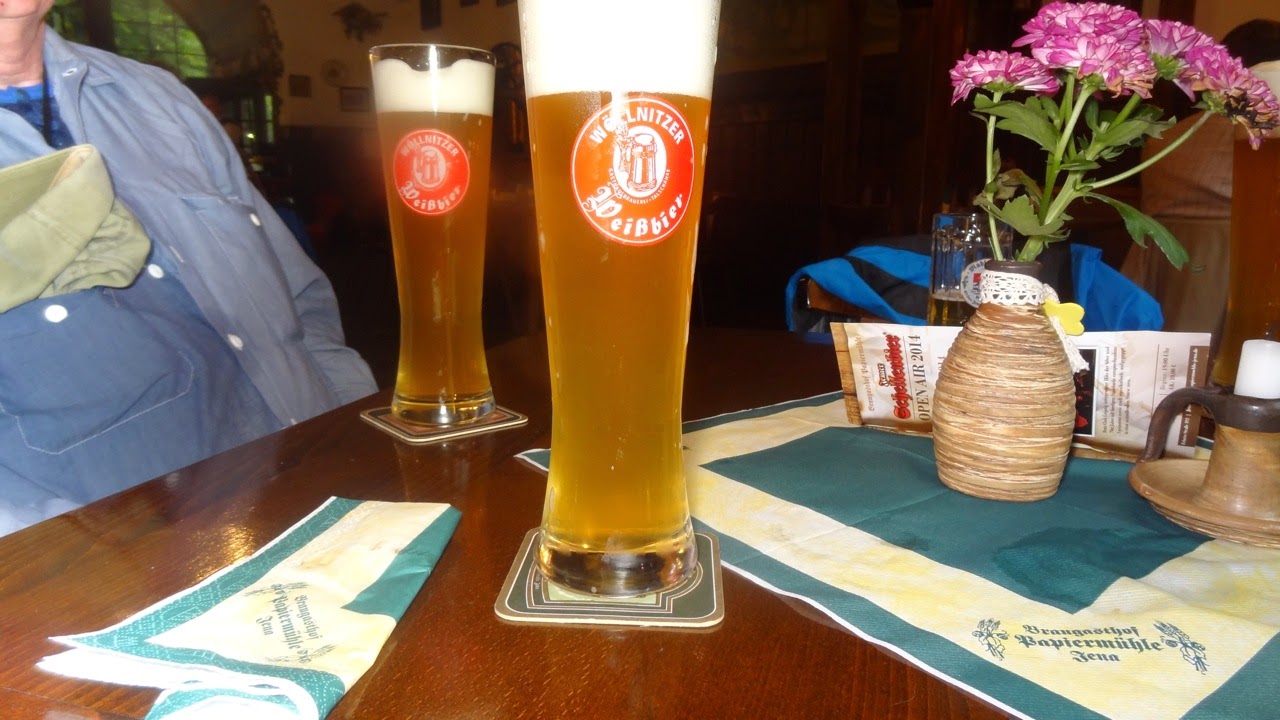 The rain had stopped but we decide to take a taxi back, just in case.