From the time we left the hotel until we go to the Rhine bike path (about 5 minutes) it started raining. So we stopped and put on our rain covers. It was pretty much just a light drizzle but it was there all morning, sometimes becoming a bit stronger. Not so much fun.

Going south along the Rhine, we first crossed a quite elaborate bicycle/pedestrian bridge over the entrance to the harbor.

After that it was beside farm fields along the Rhine (not many buildings allowed in the flood plain here) or some overland stretches thru the woods (which blocked some of the rain) until we reached the Rhine across from the town of Zons.

I should mention that my friend Tom from Los Angeles joined us in Düsseldorf. He has a bike from the same company as I -- Bike Friday -- but a model with smaller wheels that folds into a fairly small bundle. Normally it is for commuters but he had his outfitted and geared as a touring bike.


Soon the ferry was coming back our way. The rare was €1.50 for a bicycle which I thought was bit steep as cars were only €3 but I bet during the warmer months they get a lot of business from cyclists

The ferry seems to be owned/run by the town. Makes sense I guess to bring in visitors when there is no bridge. 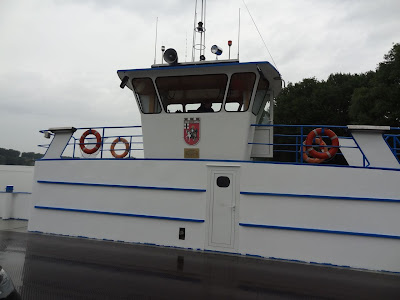 By this time we were pretty wet. The Gasthaus on our side was closed, but luckily the one on the Zons side was open.

They had both Franlenheim Alt and Früh Kölsch on draft (keg) which more than the map said we were about half way there. After a leisurely lunch, involving some beers and some warm beverages, we finally were dry-ish and in break in the rain we headed out.

The rain actually lessened and finally pretty much stop when we got near to Cologne. We had a choice of going more directly into town, along city streets (but probably with bike paths) or following the Rhine, which twists a bit, and since we had made good time we went with the more scenic route along the Rhine,

Soon we could see the cathedral (Dom)

Our hotel was right on the Rhine, so no problem finding it.


Not far away is one of the better Kölsch breweries, Malzmühle, so we headed there first for a beer or three.

The tap room for Brauerei Pffafen (the brewery is too far from Cologne so the beer can't be called Kölsch) also had a bock beer.

The bock was actually not too bad -- a touch on the sweet side and didn't go well with the crispness of the "bier" (what they called the not legal Kölsch ).

I won't go into the details of the others, just some pictures.

Anyway, the Päffgen was pretty good, my favorite of the day and in the top group for the others. 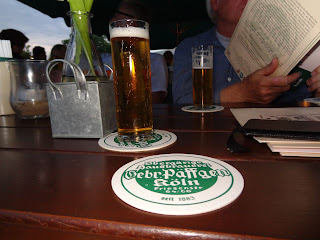 Tomorow is a full day, down the Rhine to Andernach.