After a late night, we got an early start, out the door at 9am. After winding our way thru Antwerp we arrived at the Albert Canal, which we will follow until Herentals.

As seems to be the case in Belgium these days, there was construction and detours on both sides of the canal, and none of the detours were well marked.

At Herentals we left the Albert Canal and were to pick up the Herentals canal. On the way into town we waited for 10 minutes at train crossing, with no train in sight. All of the locals patiently waited, and eventually a train came.


After a quick lunch and a visit to a bike shop, we pressed on. I was too busy riding to take pictures. Ot Neerpelt we left the canal and about 6km later we were in Hamont-Achel.

We found our B&B and got situated (took a long time).  In the lounge fridge were bottles of Budels Pilsener and Achel Blond -- both brewed within about 5km of here. It what was rare occurrence, I went with the Budels. Better for re-hydration.

Across the street was a highly recommended (Michelin listed) restaurant so we went there for dinner. It could have been a hot dog stand and that is where I would have eaten because my legs would go no farther.

In the "salon" while we waited for a table, I had the Achel Blond I didn't have earlier. All was now in balance.

Dinner was a set menu and very good. With it, we had bottles of LaTrappe Quad Oak Aged. 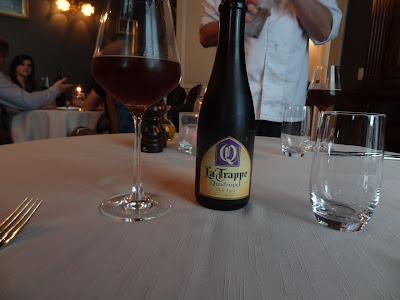 Dessert was a selection of most local cheeses and all were excellent. We accompanied them with a bottle of Chimay Grand Reserve. It wasn't the kind of place you took pictures, so I didn't except the one.

The distance for the day was 97km -- I think that is the longest I have ridden in one day.