Dover to Dunkirk to Cassel

The day started with the indignity of Friday be hauled upside down. What happens when you are a bit different, you get no respect. 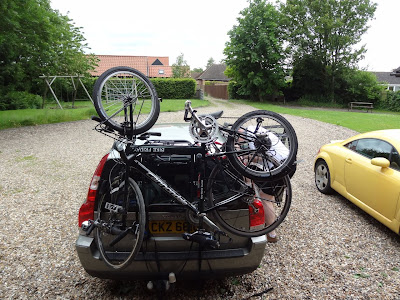 A bad accident on the freeway (excuse me, "motorway") around London caused us to be behind schedule. When we got near the port, traffic was so backed up we unloaded the bikes and road the 2 miles in to the ship. Turns out it was late as well (about an hour) but it worked out well because they let bicycles on first and we got a good table for the crossing.

There was no bike route out of the port, so we rode on street, causing some drivers frustration -- they should honk at the French government for not building a bike route away from traffic.

Soon we were in the countryside. The wind was very strong, 20mph I'd guess at times. Mostly it was a cross wind but that was enough to make for tough going. Sometimes it was a headwind, pure torture. Very occasionally a tailwind.

Tim (my cycling companion) told me Cassel was on a big hill. What he didn't tell me that it was nearly 180m over sea level and the highest point in French Flanders. All but about 50 of those meters were in the last 4-5 km, I am not ashamed to say there was walking of the bikes.

But the beer at the top was worth it.
We had a very, very good dinner at our hotel, Hotel Restaurant Le Foch. They only had two beers, but it was enough. First was Triple Secret Des Moines from Brasserie Grain D'Orge in Rouchin, France. At just over 7% it a little low on the alcohol scale for a Belgian Triple, but it was very good. Light and drinkable and just enough spice to make it interesting.


Next was another local beer, one that I had had before, 3 Monts from Brasserie de Saint Sylvestre. What I didn't know before, was the Cassel is one of the 3 mountains. It is brewed just a few miles from here.


We wandered down the street to the Kerelshof, described to me as the best beer bar in town. It certainly is a very nice place and would stand with the better beer bars I've visited.
The proprietor said we must try the new beer, Dalva, from the nearby Brasserie Thiriez in Esquelbecq. Turns out it was a 8.5% Double IPA. Not what I expected to find in Biere de Garde country. It was very nice, but nothing particular "French" about it but it stands up the the better Double IPA's in the US.


Next up was a more traditional Biere de Garde, Cuvee Des Jonquilles from Brasserie Baileux in Gussignies. Very Tasty. 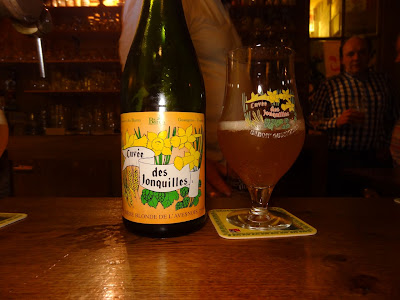 The had another French IPA, Hop, Hop, Hop from Brasserie du Caou in Merville. With a name like that, you couldn't pass it by. Nice, but I think I liked the Dalva more. 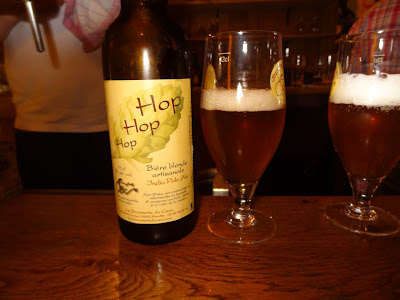 By now it was past 11pm and my legs were telling me they were going to quit working if I didn't soon get horizontal, so I called it a night.

Tomorrow: Cassel to Oudenaarde but if the weather is bad we may take the train if we can reach Poperinge.