It is always hard to leave Bamberg. But at least we were going to visit some breweries on the way south.

We took west bank of the Regnitz as our initial route. Not the most direct but you get to travel on the Pettstadt ferry. This is a ferry across a bit of the Regnitz that locals claim has been in existence in one form or another since the 1400's. The current edition dates from 1956. What is unusual is that it is power solely by the river, with an occasional application of muscle by the ferryman.


We then crossed over the canal itself and we soon passing Hirschaid. There is a lovely brewery here, Brauerei Kraus, but we didn't really have time to stop (plus it was still early).

A bit later we turned off the canal bike path and headed inland to Buttenheim, home to St Georgen Bräu and Löwenbräu Buttenheim. The breweries are right next to each other. We could smell one of the brewing and when we pulled up to Löwenbräu we knew it was St Georgen: There was a big "Betriebsurlaub" (basically, "Gone Fishin'") sign on Löwenbräu. There was some activity inside, so I ducked in and asked if the keller was open. It was.

So we heading a bit out of town to the Löwenbräu keller and had our morning "sharpener."

Tim thought it only fair we have a St Georgen, so we rode back to town (a few hundred yards) to St, Georgen.

Tom decided to try the Helles. It wasn't as good as the keller bier. Tim had tried the kellerbier in an Italian restaurant in Bamberg and was disappointed the one at the brewery wasn't as good. Go figure.


We got back on the road and headed for Forchheim. We were no longer on the canal so it was a bit hilly and we picked up a head wind. Not a fun ride. When we finally made, we were ready for beer and lunch. There are three breweries in the old town but one is closed on Wednesday, so that left us with Brauerei Neder and Brauerei Hebendanz -- which are conveniently practically next door to each other (a fourth brewery, Grief, used to have a tap room here as well but it has closed).

We started with Neder. Much to my surprise, they had no food. So Tim went to a butcher and  got some sandwiches while we ordered a beer.


After eating, a man came up and asked if we could move our bikes so he could park his truck and unload. So we moved them 100 ft down the road to Hebendanz. 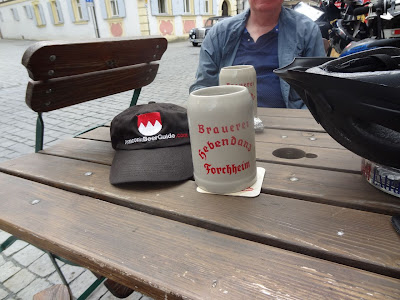 The rest of the trip was basically uninteresting, except for that strong head wind. At some point near Erlangen we met up with a friend (Nick) who showed us the secret way into Nürnburg without riding on busy streets. We saw the possibility on our map, but what we didn't know was at some point you ride underneath the canal -- it is supported by what looks like a huge bridge. And in order to get underneath you have to ride into the village of Flexdorf for a ways. But we made it and were soon on our want into Nürnberg.

After checking in to the hotel, we headed for Schanzenbräu, the relatively new (2005) brewery in Nürnberg. We had a nice dinner and the beers were on the upper side of brewpub type beers we've   had this trip. I forgot my camera so no pictures.