My plan for the day was to do more riding and stop a less breweries. I only stopped at one brewery along the way (plus one in Bamberg for dinner on the way home) but I was thwarted by four bierkellers as well.

Along the bike path just outside of Pettstadt is a small keller that had been recommended to me, but I had never been to as they normally open at 3pm and when I'm on my bike it's usually earlier than that. But today was a holiday (Whitsun) so they openned at 10:00am. It was about 10:45 when I went by, so why not have a beer, what could it hurt. 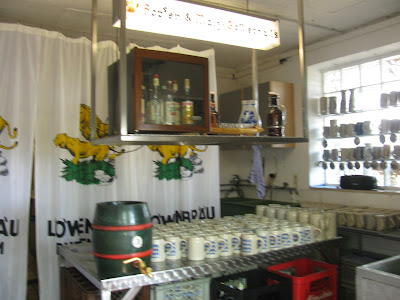 All set up to serve beer

The beer they serve is Löwenbräu Buttenheim Kellerbier. which is one of my favorites. 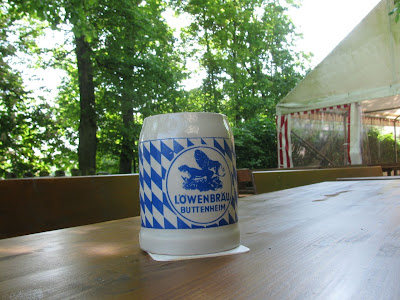 First beer of the morning

By the time I left it was starting to fill up with cyclists. 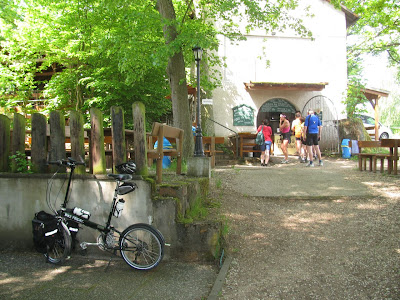 Just south of Pettstadt is one of the great experiences of cycling around here -- the Pettstadt Bike Ferry. Every day from April thru October the ferry runs carring bikes across the Regnitz. It costs €1 (50 Euro cents for pedestrians). There are no motors at all -- just a little bit of muscle from the ferryman and the flow of the river and various pivot points. 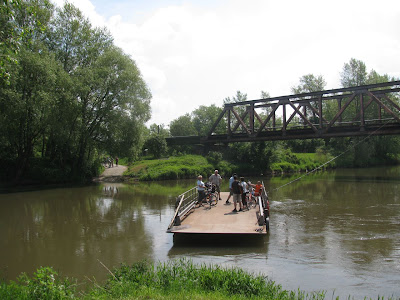 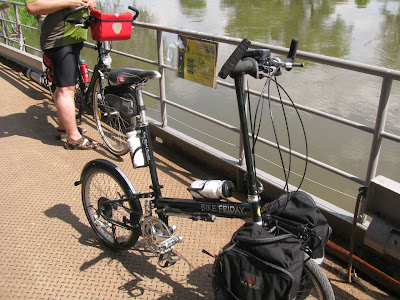 Friday on the Ferry 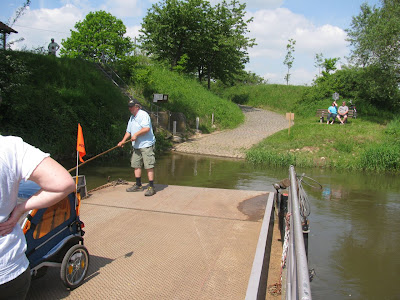 The ferryman at work

Once across the Regnitz and the Main-Danube canal, I continued southward. I passed the breweries in Hirschaid, Buttenheim and Eggolsheim I had visited on Saturday. Suddenly a waypoint came into view on my GPS -- Witzgall Keller outside of Schlammersdorf. Norminally this keller is only open on Sundays and it is the only place you can drink the draft Witzgall Landbier. Well most places that are open Sundays are also open on holidays so I thought it worth a small detour. As I went by there was sadly no signs of life. I continued down the road to the village of Schlammersdorf and stopped at the brewery. They told me the keller would open at 2pm (1 1/2 hours from now) but they were closing to move to the keller but they had time to serve me a beer. I couldn't pass that up, so I had a glass of Witzgall Vollbier. 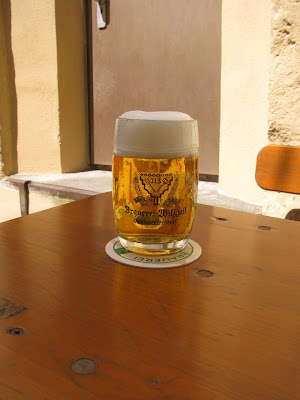 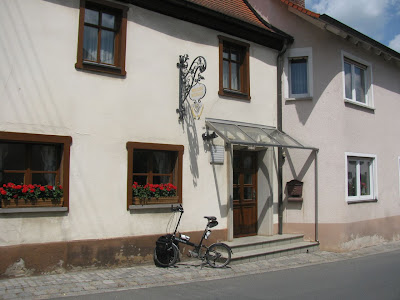 Friday in from the Brauerei Witzgall
Now was decision time -- to continue down the canal bike path as I'd planned or hang around until 2pm and stop back it the Witzgall keller. I decided to continue on to Hallerndorf which has two nice breweries (Lieberth and Rittmayer) both of which have nice kellers in the village. I would get somethig to eat and then head back to the Witzgall Keller. Just before Hallerndorf my mobile phone rings. I pull over and answer and its Jürgen, a friend who lives near Ansbach. He and his wife and son were out visiting kellers. We decided to meet at Roppelts Keller in Stiebarlimbach, which was not far from Hallerndorf. 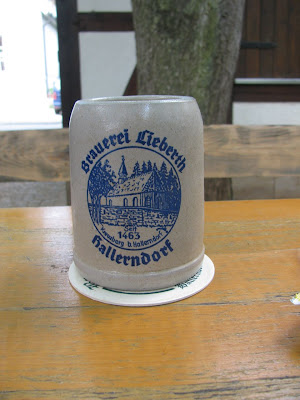 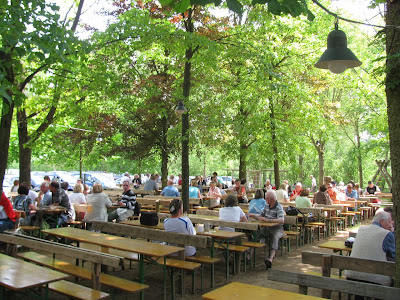 A view of the keller. It was still early (1pm) but it filled up while I was there. 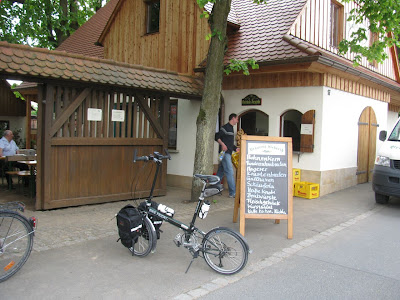 Friday out in front of the keller
A bit later I pulled into Roppelts Keller, got a beer and found an empty table. About half way thru the beer Jürgen and family showed up. They were eating, so I had another beer to be sociable. 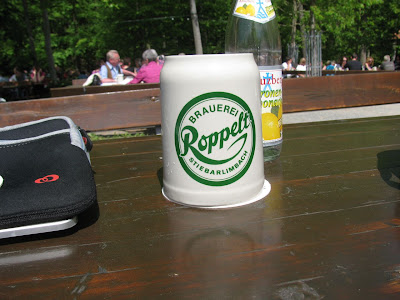 Roppelt Kellerbier, Stiebarlimbach
Jürgen was telling me of this great keller not too far away by car that served the beers from Baruerei Prechtel of Uehlfeld. He would bring me back afterwards to so I could ride home. I asked if it would be easier to bring the bike and he said yes, but they had only a small car. Not to worry, Friday is very flexible. So we packed up and went to Voggendorf. 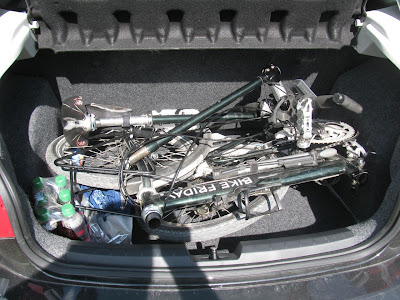 How Friday traveled to Voggendorf

This was a more tradition keller, on the top of a hill, You could see the indivual cellars dug into
the side of the hill. 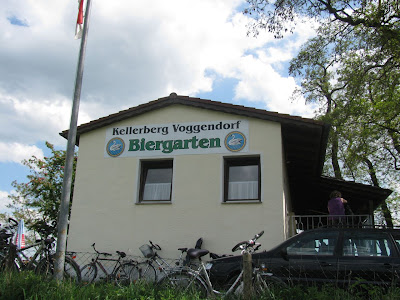 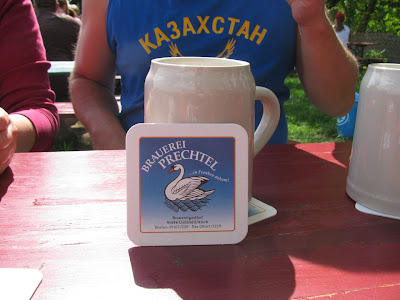 Jürgen warned me the beer had an unusual flavor and that one needed to drink two -- the second one would be much better. He was right. There was a flowery note to the finish but it wasn't the kind that comes from hops. I could see how this would be a beer you either loved or hated. 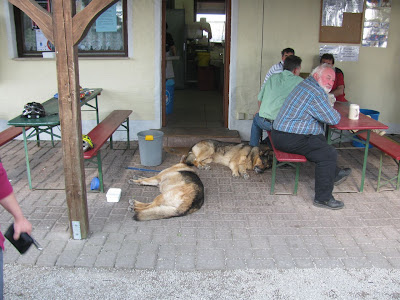 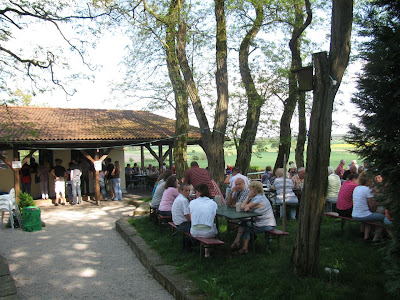 The Voggendorfer Keller
Jürgen's son Max was getting bored (as any 7 year would) so they decided to take me back towards Bamberg so I could ride home. On the way, we passed the Schwarzes Kreuz Keller in Eggolsheim, so we stopped for one last beer. 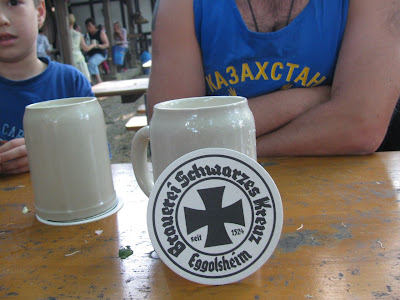 The dropped me off in fron of Braurei Kraus in Hirchaid, which I managed to avoid, then rode back to Bamberg. On the way I passed Spezial so I went in for dinner and a couple beer, then home to bed.

Distance ridden: 30 miles, plus or minus.
Posted by The Mad Brewer at 5:15 AM