It was a rainy day, so I just did a short ride out to Merkendorf and back. Only to find out both breweries were closed (welcome to Franconia). Yes, I could have called but I wanted to ride anyway. Stopped at Drei-Kronen in Memmelsdorf on the way out and Göller in Drosendorf on the way back.

I got thoroughly soaked -- I expected to get wet as the jacket I had is really just a wind jacket but I have used it in light rain before. But it soaked thru much more quickly than I expected in a steady (but not downpour) rain. The good news is my new fenders worked fine and the merino wool t-shirt I wore underneath kept me warm even though it got pretty damp.

The first stop was for lunch at Drei-Kronen Mememlsdorf. First beer was the Lagerbier and it was as it every was. 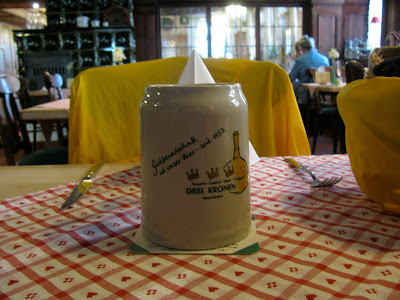 Drei Kronen Lagerbier
Herr Straub (the owner/brewer) and we talked for a bit. I noticed there beer he used to call "Hefe-Pils" was now "Keller-Pils" -- he said he had made it less bitter at the request of his customers and also switched to Saphir hops -- which he very much liked. I actually found the beer a bit more bitter than I remembered, but my tastebuds could still be hung over from the night before. 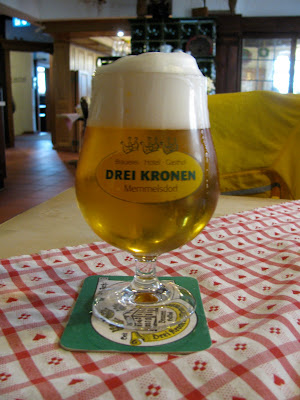 Drei Kronen Keller Pils
I continued on to Merkendorf where Hummel was closed as they prepared for the opening of their keller next week and Wagner just had a hand written sign that said "Heute Ruhetag" (Rest Day, today). When the week starts out with a holiday many places change their rest days, e.g. if normally closed on Mondays but it is a holiday they will open and close Tuesday instead. But sometimes just to keep people hopping they mix it up. Oh well, another time.

On the way from Memmelsdorf to Merkendorf you pass thru Drosendorf, home to Brauerei Göller. This sometimes gets a pass from me if both Merkendorf breweries are open as I usually like their beer better. Göller is more variable, as well. This time they had a Jubeläumsbier ("Anniversary Beer") in honor of the 25th year of thier biergarten. It was €2.50 for a liter (or €1.90 for a half) which should have told me something. I went for the half and to be honest it was just to yeasty and "unfinished" -- but not in a good way (I often like youngish beer). A half liter was enough. 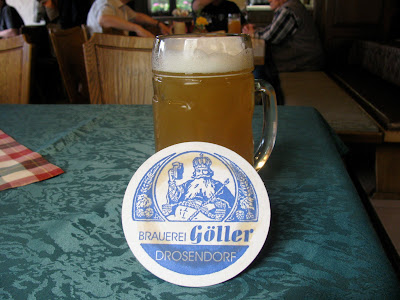 Göller Jubeläumsbier
I got even more soaked on the ride back to Bamberg, so I decided to reward myself with dinner at Spezial. It was crowded as the courtyard was closed and only half of the back room was open. The table I chose was reserved for 8pm so that gave me an endtime -- often important at Spezial -- especially when you are not staying upstairs and have to navigate home. 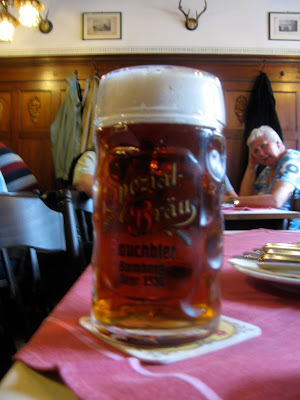 My friend and landlord Frank came by as I was finishing dinner and we had a couple more beers. When the folks who had reserved the table showed up we went across the street for "one last beer" at Fässla. Since I hadn't had the Lager in a while I ordered one. It was OK but I really like the Pils better. It is funny because 5 years ago it was the other way around. There was a patch where the Lager had too much diacetyl and I switched to the Pils and now even though the diacetyl problem is gone, I've stayed. 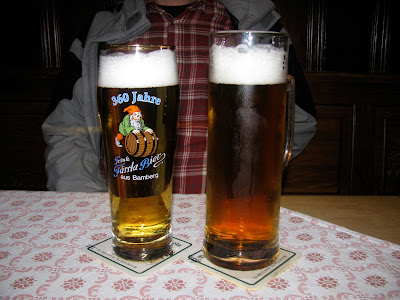 Fässla Pils and Lager
Frank had also ridden his bike so we rode home together. Where his street (Schrottenberggasse) meets Sandstrasse is the newly reopened Blaue Glocke. They serve the beer from Brauerei Fischer in Freudeneck -- always a nice choice. So of course, we decided to have one more last beer.

I had only been the courtyard before not in the pub itself. The interior was very nice lots of dark old wood but the light fixures were pure 50's art. A great combination.

The beer was a little disappointing and we attributed that to maybe cleaning problem's in the pub's line, but it didn't stop us from drinking it -- or having a Schnitt.

As a coincidence, when I got home and checked my email I had a message from Georg in Coburg who had said Fischer had had some problems recently and the beer was a little off. So maybe it wasn't the lines after all. More research is needed. 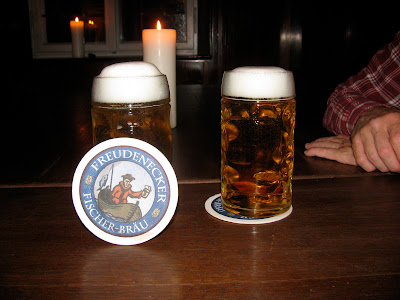 Fischer Freudeneck at the Blaue Glocke
Posted by The Mad Brewer at 2:43 AM