The day was supposed to be cloudy and chance of some sprinkles, so I decided to go for a ride. I hadn't been west yet, so I decided to head for Stettfeld for lunch and then go on to Zeil or even Hassfurt.

I got a bit of a late start, so I stopped in Bischberg at Brauerei zur Sonne for a "freshener." 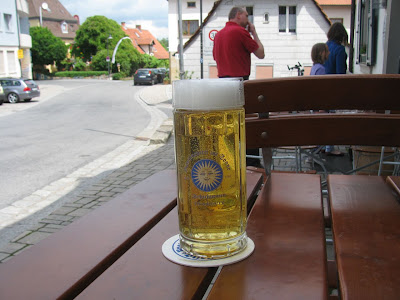 It may have been me with the first beer of the day, but it didn't taste as crisp as it usually does. But it was still good to the last drop... 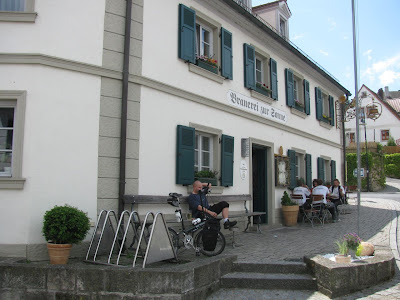 Friday getting some Sonne
On the way you pass Braierei Mainlust in Vireth (whose beers I generally don't care much for) and a short detour up the hill will take you to Brauerei Kundmüller in Weiher (whose beers I like very much) but I passed both of them by. I probably should have stopped because a couple km outside of Staffelbach (home of Brauerei Hartlein and the last village before Stettfeld) the heavens opened up and I got drenched. I managed to duck under an overpass and get my jacket and rain cover for my helmet. Then I continued on where I found (as I expected) a closed Brauerei Hartlein. It doesn't open until 5pm but I had hoped that somebody would be around so I could at least wait inside. No joy.

So I went on the Stettfeld (about 4 km) and got thoroughly soaked. Just as I pulled in the Stettfeld the rain let up and by the time I got to Adler-Bräu it had pretty much ended. I stopped and checked the front door -- it was locked. Oh noes! After a hour or two of panic (actually about 10 seconds) I went around the side and saw their biergarten was open. So in I went.

There was nobody at the serving window so I check the lunch menu while I waited. My (and many others) tradition dish here is "Schinken mit Ei" -- with literally translated is "Ham with Egg" -- sort of scrambled eggs with ham mixed in. But it wasn't on the menu. Oh noes! The nice young lady who runs the place during the week came out of the main building and asked what I wanted. I ordered a beer and ask if I could have Schinken-mit-Ei. Of course, she said and asked if my father was with me this time (he was the last two times I was here). I told her I was alone but my father would come in August. I don't think they remember us so much as the bikes -- they are distinctive.

The beer came, then the food and all was right with the world, except I was still outside and not inside were it was warm. 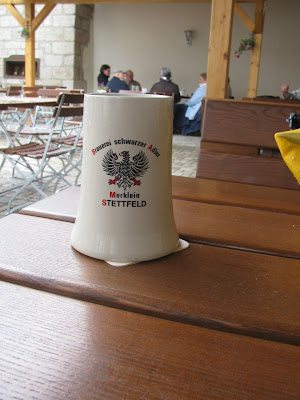 Schwarzer Alder Pils (you'll have to take my word for it) 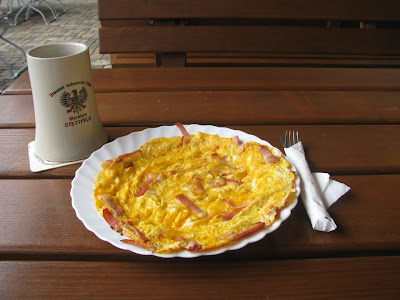 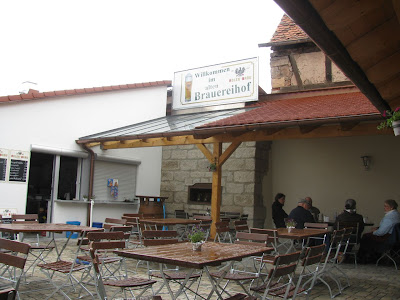 A picture of the biergarten (technically the "Brauereihof") 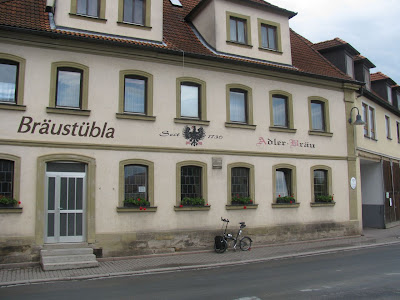 Friday at Adler-Bräu, Stettfeld
The next town is Ebelsbach, which used to have two breweries -- and still has two buildings labeled "Brauerei" but both no longer brew themselves. The weather still looked a bit threatening so I decide to play it safe (and wimp out) and take the train back to Bamberg. While waiting for the train the sun actually peeked out and I almost changed my mind but common sense prevailed and I went home.

When I got back to the apartment (and got warm and dry) it was still early so I went down to Schlenkerla for a pick me up. I was just having my first sip when the four guys from yesterday showed up, looking as if they too got caught in the rain. They joined me at my (standing) table and went to get beers. It is always fun to watch people take their first sip of Schlenkerla. Often you see a big frown, usually its a confused look ("is this beer?") and then either a smile or frown. Occasionally you get a big grin right from the start. I got three grins and a frown which is much better than average.

After a few beers it was time for some food. I was headed to Klosterbräu but they had lunched there and so we parted ways. I'm sure they'll be back to Bamberg again.

The flagship beer at Klosterbräu is their Braunbier -- it has been up and down in quality the past few years but it was on today. 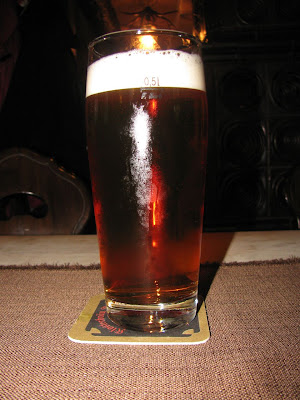 Klosterbräu Braunbier
Dinner was a schnitzel with Spargel (while asparagus) and a Maibock for desert. The first time I had the Klosterbräu Maibock was back in 2002. It was very tasty and over 7% alcohol but well hidden -- this makes for a dangerous combination. This years edition was good, but not up to standards of that first one. 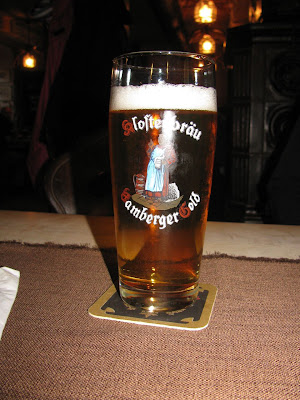 Klosterbräu Maibock
It was not yet dark (about 9pm) so I decided to walk up the hill (Stephansberg) to Stöhrenkeller and see what beers they had tonight. It turns out to be Mönschambacher Export, a beer I've never had on draft before. So I had a couple, just for research purposes, mind you. I still like the Lager more, but this was nice and well worth having. 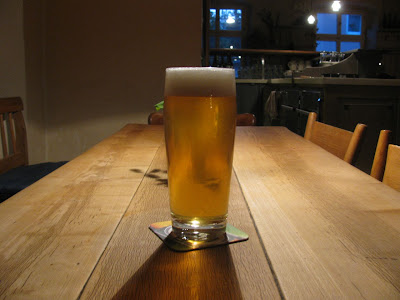 Mönchsambacher Export
By now it was past 11pm and time to call it a night. Tomorrow is supposed to be the last day without rain while I'm here, so a bike ride is in order.
Posted by The Mad Brewer at 1:30 AM