This was really an rest day as far as bicycling (not for beer, though). I had laundry to do, errands to run and even a little work for a client back home.

I stopped for a bowl of soup and a beer at Spezial and met a group of men (one each from Scotland, England, New Zealand and the US) who had come to Germany to visit the Erlanger Bergkirchweih (sort of Erlangen's version of the Oktoberfest). They had decided to come up to Bamberg to see what the beer was like. I gave them some pointers and directions and went off to finish my errands.

When all was done, I decided to go to Mahrs Bräu for dinner and a beer or three. I ran into the same group and they invited me to join them. This was their third brewery (Spezial, Fässla and Mahrs) and they were already in love. The decided to come back the next day to visit the breweries they missed.

The pub Mondschein is about half a block from my apartment and they have daily specials. The Thursday special was "Landbier" for €1.70 -- I felt I needed to check this out. It turned out to be "Veldensteiner Landbier" which is brewed by Brauerei Kaiser in Neuhaus an der Pegnitz. This is a large, industrial brewery that brews some very bland beers -- but they do some that while are not world class examples of the style, are decent. The Landbier is one of those (See here). A little too much caramel sweetness in the finish for me, but an OK beer -- especially at €1.70 for a half liter. A heads up, though -- Mondschein is a smokers bar so get there early (and in good weather when the windows are open) because it does get very smokey.

I wasn't quite ready to call it a night so I walked down to Der Pelikan for a nightcap of Huppendorfer Vollbier. Sorry, no pictures -- I'll do better tomorrow.

Update: I had forgotten that I did take a picture of a Mahr U: 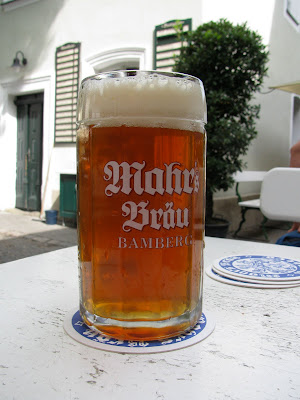