After a leisurely breakfast, we coasted down the hill to pick up the Five Rivers Trail. We had about 30 odd kilometers to Nürnberg and all day to do them if we needed it. Both bikes were running well it was mostly downhill. At some point we missed a turn down into the Pegnitz valley but there was a nice paved bike path following the highway, so we went with pavement over scenery.
Soon we found ourselves in a nice park along the river and some lakes formed by the Pegnitz. There we ran into an unexpected road hazard -- geese in the road. 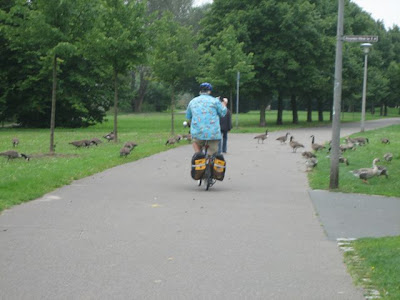 Beware of Geese
My Dad took this picture as I was trying to take a picture of the geese, not run into any of them  and also miss the pedestrian going for a morning walk. All collisions were successfully avoided.
A short while later  we arrived back at our starting point -- Nürnberg Hauptbahnhof. 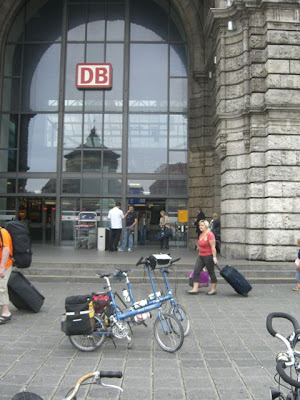 The Circle is Complete
We caught the next train to Bamberg where we had an interesting problem -- the bicycle car was absolutely full. Bikes were literally piled one on top of another. We took off our panniers and stacked them on the stairs to the upper deck and our bikes were small enough that we could squeeze into the vestibule. I had talked about getting off at Hirschaid but there really wasn't a chance (and my Dad was tired). So we went on to Bamberg (where the bike car emptied out) and rode to our apartment. Then we had to find a beer -- not too hard in Bamberg.
Posted by The Mad Brewer at 8:51 PM