We got the bikes assembled and there were no parts left over, so we went for a shakedown ride.
First stop was the village of Memmelsdorf, about 5 miles away. Memmelsdorf has two breweries (10 years ago there were three). Brauerei Höhn uses a wood fired brew kettle but is closed on Wednesdays so we sadly rode on by.  Just down the street is Brauerei Drei Kronen  owned and operated  by Haus-Ludwig Straub who is also the founder of the Brauerei Gashöfe marketing group. We had his rauchbier, Stöffla and a light lunch. His daughter just finished her brewmaster ("brewmistress?") course at Weihenstefan and is now doing a practicum in Switzerland. Hans-Ludwig says she now tells him everything he does wrong when she watches him brew :) 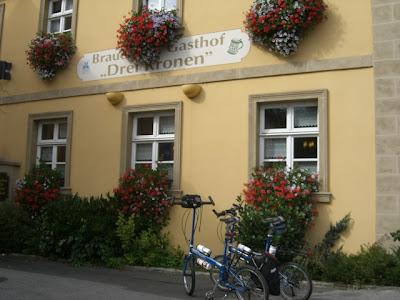 Three Crowns but only Two Fridays
Next stop was  Merkendorf, also home to  two breweries. Both are good but Brauwerei Hummel is one of my favorite breweries in all Franconia. Last year when we rode there they were closed for their summer holidays which was a big disappointment.  This year I made sure they were open. Starting on Sunday is the town's annual "Parish Festival" (kirchweih or kerwa in Franconian) and preparations were already underway. They had erected a large tent behind the brewery and were already serving the special beer they brew for the festival. How many Parish festivals in the US have a beer specially brewed for them? It would probably increase church attendance. 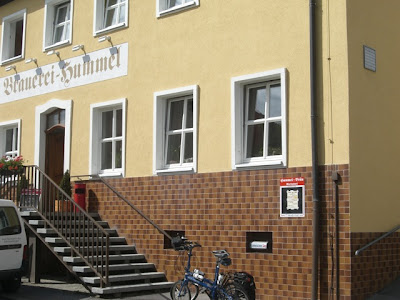 I had the festbier and my father had the very nice kellerbier. I acutually like the kellerbier better so I had to order one. They also brew a smoke beer, Räucherla ("little smoke") and in the fall a very nice smoked double bock, Räucherator. 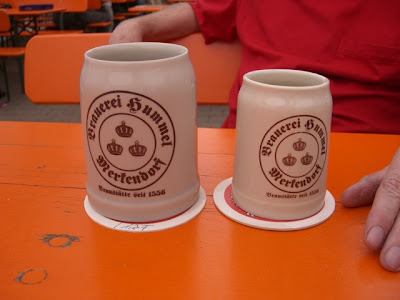 The other brewery in Merkendorf is Brauerei Wagner and we stopped by there for a quick one. Inside was an older couple sitting with a middle aged nun, in full habit, drinking a beer. 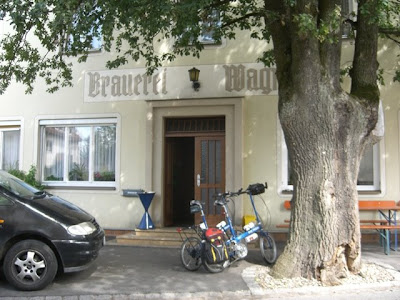 Brauerei Wagner -- no operas to be heard here
By this time we had ridden 8.5 miles and it looked like a storm was rolling in, so we decided to head back to town. On the way, one in Bamberg, we passed by Brauerei Fässla so of course we had to stop in to make sure the Gold-Pils was a good as ever. It was. 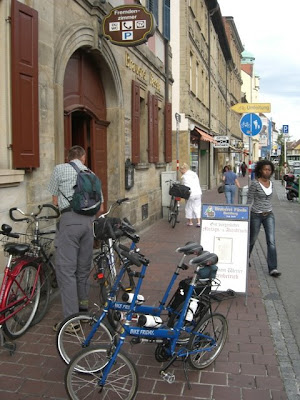 Insert catchy tag line here -- couldn't think of one.
So back home and then up the hill to Spezial Keller for a night cap. Total distance -- about 18 miles.
Tomorrow we'll take a train down to Eggolsheim and ride up the Kreuzberg where there are three beer kellers, one with a newly opened brewery.
Posted by The Mad Brewer at 9:36 AM