Heaven, thy name is asphalt. Finally, today we had mostly paved trails and most of the unpaved sections were crushed limestone and fairly hard.

We were up early and were on the trail before 10. Regensburg can also be difficult to get around -- both the rivers Regen and Naab join the Danube there. We wanted to follow the Naab north. We followed the signs to the Naabtal Radweg (Naab Valley Bike Trail) and were soon out of the city.

The Naab was fairly wide, but very slow -- no visible current and in fact often looked more like a pond than a river. We were often on one lane country roads rather than a dedicated bike path but vehicular traffic was light. 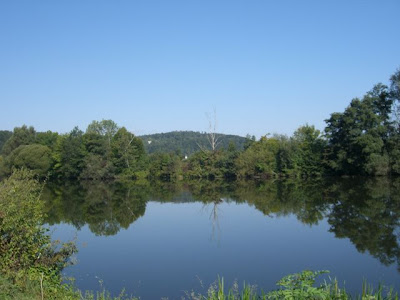 The Naab River -- yes "River"
After a couple of hours we ended up in Kallmünz, home of Brauerei zum Goldenen Löwen, which was recommended to me by a friend in Bamberg. I knew the brewery pub didn't open until 6pm, but I had heard a few other places in town served the beer as well. 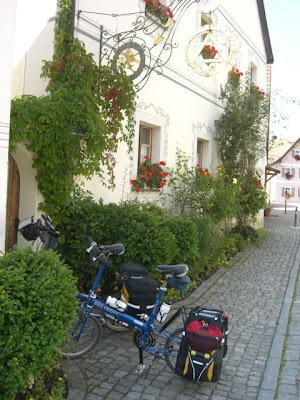 Yet another closed brewery
And as we rounded a corner we came upon the "Bürstenbinder." What was interesting is that hanging off of their sign was the six pointed brewers star -- the Zoigl. Usually you only at breweries, not pubs. There were five or six tables outside but in the shade but they were all taken, so we went inside. The doorways were so low that you had to duck. The room looked to be unchanged for hundreds of years. 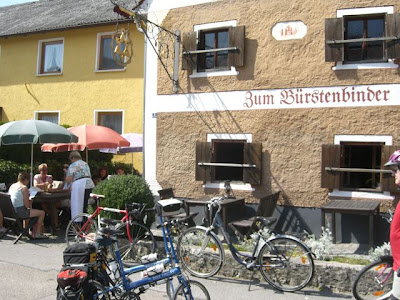 zum Bürsenbinder
We picked up the menu and the mystery of the brewers star was solved -- they were serving Zoigl beer. In the northern part of the Oberpfalz they have the tradition of a community owned brewery and various families take turn brewing and actually age the beer in their own cellars. The families take turns serving the beer and when it is one family's turn they hang a Zoigl star outside their door. In this case though, I think it is probably not true Zoigl beer, but what the hey -- I'm thirsty, they have beer -- case closed. The beer was dark and malty, but had no discernible hops or bitterness. WIth even a little more bitterness in finish it would have been a wonderful beer. 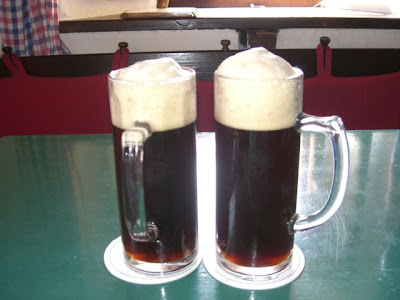 A hopless Zoigl
The other quandary on the menu was most of the food was listed under the heading of "Bauchstechenerla" which literally translated comes to "Little Stomach Stickers." With some trepidation I ordered one with cheese -- surely they were made from pig stomaches or some such? It turns out it was basically fried noodles with whatever topping you wanted. I guess would say it "sticks to your ribs"

The pub had one woman who not only served the beer and food, she was also the cook. That meant our lunch break took a bit longer than planned. Kallmünz is where the Vils and Naab join and now we wanted to follow the Vils. We found the trail along the Vils and were soon making time northward.

Along our left was a forest with periodic signs, in English then German, "Military Area -- Danger to Life" -- a few said "Danger of Life" which was kind of funny. I assumed it was an American military reservation since English was first, but the wording was clearly done in German then translated to English.

We also had more hills -- not big ones but enough to make you work. What it looked like is every once in a while a farmer didn't want the bike path thru his field so you went around it, which made you ride up to the foothills of the valley wall and then down again.

Going was much slower and when we reached Schmidtmühlen it was time for a break. We rounded a corner and there was a cafe open and about 30 bicycles scattered around. We ordered some soft drinks and while drinking them a woman came over and asked "Weren't you at Brauerei Kraus in Hirschaid last year?" This is a small town south of Bamberg with a very good brewery, and yes my father and I were riding there last year. She had recognized our bikes! The only beer was bottled, but one I hadn't every tried, Naabecker Helles. I ordered one and it must of been good because it was gone in record time, I think my beer reservoir was a liter low.

A number of bike trails meet in Schmidtmühlen and we had a little trouble finding the right one out of town, but were soon peddling northward. The trail was mostly wooded and not paved. It was marked as horse trail as well. We didn't see any horses but there was evidence of their presence.

We arrived in at our hotel in Amberg pretty much at 6:00pm straight up. There are five (or six depending if you count one that is mostly a hobby brewery) breweries but only three in the old town near where we were staying. First we went to Schloderer Bräu and had dinner. They looked to be a modern brewpub style brewery. The had the obligatory Helles and Dunkles so we ordered one of each. They were nice and drinkable but nothing special to write home about -- except I guess I am doing exactly that. 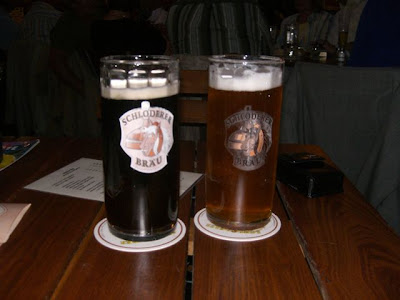 Scholderer Bräu
Around the corner was Schiessl but it turns out Wednesday is their rest day ("Ruhetag") so we gazed longingly at the front door but nobody brought us beer. "Ruhetag" is the second most hated word in my German vocabulary -- after "Betreibsurlaub!" 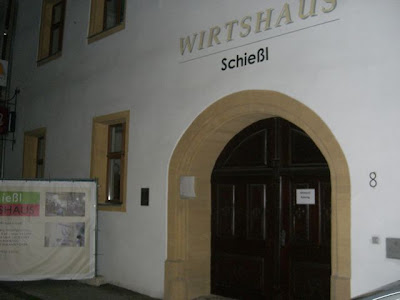 Yet another closed brewery. This is getting tiresome
Down the street was Winkler Bräu and it was all lit up so we assumed they were open. We walked in and the place was absolutely empty. I asked the woman sorting silverware if they were open and she said yes, but we might want to try the garden. We walked thru to the back and there was a very nice garden, full of people drinking beer. 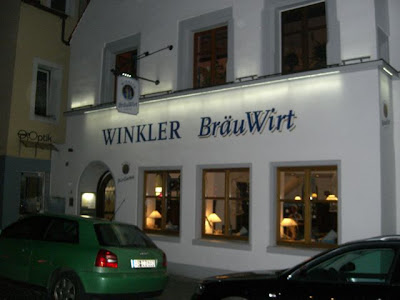 Winkler Bräu, Amberg
They had small sizes and we were feeling tired so we ordered a .3 l of each of the three beers. The waiter was confused because we order three beers for two people, but we soon convinced him it was OK. The Helles and Pils were typical of the area and tasty. The third beer was named "Zoigl" and was amber colored and had a bit of a strange finish. It was the last to be finished. 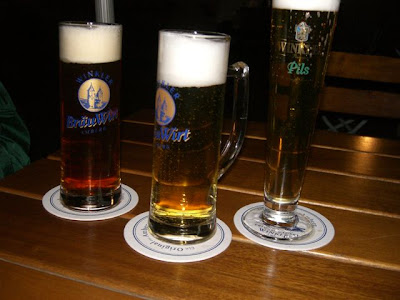 Winker beers
Tomorrow is a long hard ride. It is nearly 80km to Nürnberg and there are some serious hills marked on the map. We'll probably knock off early short of Nürnberg and finish the rest on Friday, We are not due back in Bamberg until Friday afternoon.