We had planned one more warm up ride before starting the big tour. We decided to ride north out of Bamberg. We did a similar ride last year with not so good results -- the ride was fine
but all but one of the breweries were closed.
First stop was Brauerei Wagner in Kemmern, a about 5 miles north. We arrived around noon, thinking of lunch and a beer, but I forgot to check opening times -- they didn't open until 3:30pm. So we went onto Brauerei Hummer in Breitengüssbach, another couple of miles only to find they were close for summer holidays! Not an auspicious start. We were hungry so we got a couple sandwiches at the bakery across the street.
Next stop was Brauerei Sippel in Baunach. In past years this was a well respected little brewery, but some people in recent years had had only so-so (or worse) beer. Others reported it was fine.  I hadn't been there in 3 or 4 years so it seemed a good time to check it out. 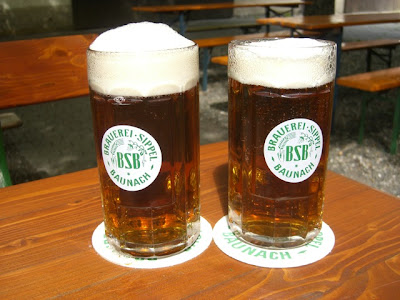 Just a sip at Brauerei Sippel
We sat in the nice garden they had around the side. The beer was very nice, so maybe those bad reports were just a one off event (brewer on vacation?)
Next on the list was Brauerei zum Goldenen Adler ("Golden Eagle") in Höfen.  We got there around 2:30pm but they didn't open until 3:00pm. I knew this (and had figured it into the planning) but luckily 2 miles up the road is the village of Freudeneck and Brauerei Fischer. So in no time at all we were relaxing in their garden with their nice lagerbier. 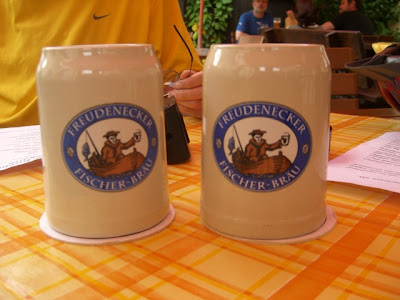 Some are Fishers of Men, we are Fischers of Beer 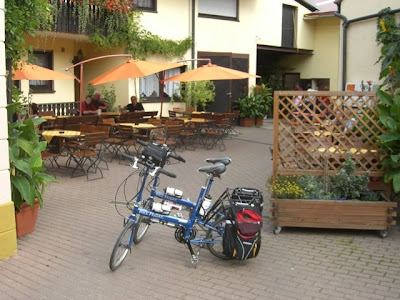 Friday goes Fisching at Brauerei Fischer, Freudeneck
They were setting up for the church festival ("Kirchweih") and as we road back down the narrow single lane road, people were starting to arrive. There probably was a hot time in old Freudeneck that night.
A quick ride and one steep hill found us back in Höfen, where zum Goldenen Adler was open for business. 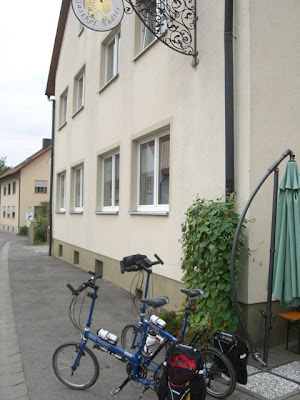 Friday soars with the Eagles at Brauerei zum Goldenen Adler, Höfen
The beer was nice but was not quite as clean in the finish as I would have liked. Very drinkable and really hit the spot.
We had ridden just about 17 miles and it was time to head home. We chose a slightly shorter route home, bypassing Baunach so Brauerei Sippel didn't tempt us. Along the way we ran in to some light rain, but luckily it didn't last. We worked our way back to Kemmern and found Brauerei Wagner doing a land office business. It was still threatening to rain and starting to get a little dark, so we just had one quick beer and rode back to Bamberg. 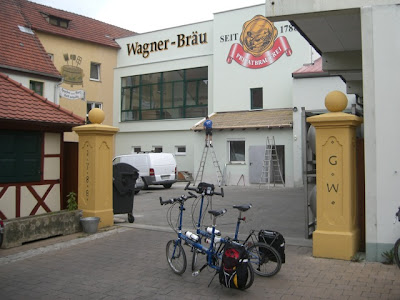 Friday still looking for Opera at Brauerei Wagner, Kemmern
We hit was passes for rush hour traffic in Bamberg but were shortly back home, dry but somewhat saddle sore. As we pulled up the apartment the GPS just ticked over at 30 miles. A long day but a great ride.
Saturday we'll take a break and get packed for the big trip, catching an 8:30 train to Nürnberg, where we'll start the Five Rivers trail...
Posted by The Mad Brewer at 8:18 AM