We started off the day right, with a stop at the other brewery in Berching, Aldstadthotel Brauerei (a/k/a Brauerei Winkler). My dad had a coffee, I had a dunkel. It was really chocolate-y much more usual in Germany. In fact, with a little ale yeast character and some more hops it would be a nice porter. 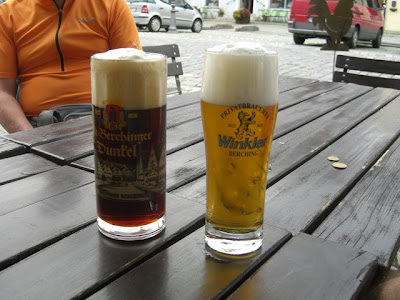 Winkler Dunkel and Pils -- Beer is still for breakfast
A side note here -- for the most part the trail was very well marked. A most major intersections were direction signs for bicycles, such at this one in Berching. 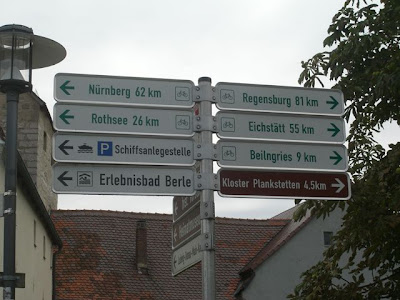 Bicycle oriented road sign
We took off down the trail to Beilngries, the next major town, about 11 km. We were now along the new Main-Danube canal -- the one actually used for shipping. We passed a number of interesting bridges (they spend a little more on design here than in the States). A panoramic photo of the wooden bridge is available here. 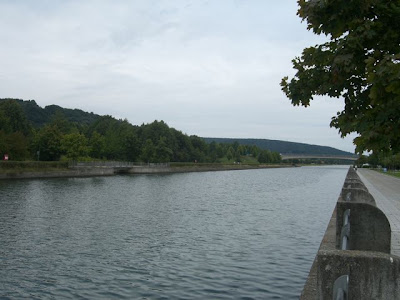 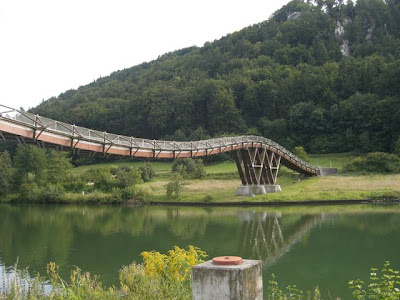 The Longest Wooden Bridge in Europe
Soon the trail turned to gravel again. Around a bend my dad pulled over and said his rear tire was low. We pumped it up and continued, soon passing the beautiful Benedictine Abby of Plankstetten. 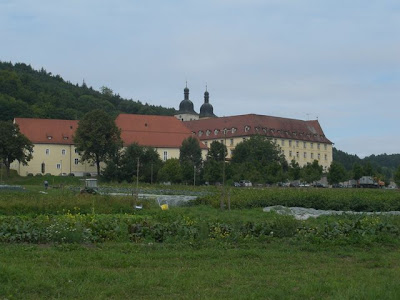 Plankstetten Abbey -- sadly no Abbey Beer
About 2km later, we had to pull over -- the rear tire was now completely flat. Two days, two flats -- not a good sign. We turned the bike upside down and began the laborious (for us) process of removing the wheel, removing the tube, replacing the tub and finally putting the wheel back on. While tire was off, we both closely inspected it to see if there was anything sharp embedded in it, but the tire looked fine.
With the bike back together we proceeded to pump up the tire to the recommended 100psi -- no easy task with a small hand pump. At about 60psi the pump gave out. But that was enough to ride on so we continued on to Beilngreis.
Luckly, the map I bought had listed bike mechanics along the route and there was one in Beilngries -- Zwei Rad Huber. We made our way to it, with the help of my GPS and that there was a parking lot on the same street and there were signs to direct motorists to it.
We found the shop (motorcycle and bicycle) and Herr Huber was more than helpful. He checked the tire and said it was OK. He patched one of the tubes (said throw the other away) and also fixed the pump. And he did all this in one tenth the time it took us!
It also turns out Herr Huber is a professional side-car racer. He showed us his latest machine -- it looked more like a rocketship than a motorcycle.
By now it is about 1pm and we've gone maybe 12 km. We wanted to get going, but lunch was in order. So a quick ride into town to Brauerei Gasthof Goldener Hahn (a/k/a Schattenhofer Bräu) for a beer and lunch. 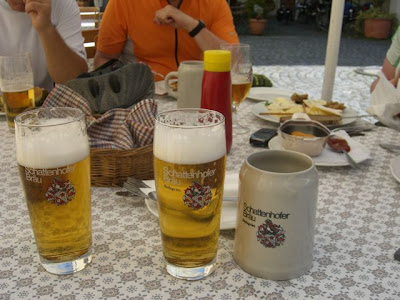 Beer is still for lunch, too
So fortified, we hit the trail again. We slowly made our way south and east with gravel trails most of the way. When I have biked around Bamberg I have ridden hundreds of miles and all of it was paved but maybe one or two miles total. We are running about 20% paved here. Not so much fun.
Nothing uneventful the rest of the ride. No mechanical failures. We had a couple of large (for us) hills which took a while but were not insurmountable. The bad news was the two towns with breweries, Riedenburg and Essing, were somewhat off the trail and we were late enough to not want to explore too much. So we were beerless the whole afternoon.
As we approached Kelheim, I was hopeful the trail surface would get better, but it actually got worse. There were large rocks in the dirt trail, large ruts and an uneven surface. Mountain bikers would be happy, but our little non-suspension bikes were not.
Anyway, around 6:30pm will pulled up to Brauerei Hotel Aukofer and all was well. After a shower we had a beer in restaurant (a nice helles and a nice dunkles) then went into town for dinner and some beers at the Weisses Brauhaus -- the tap room of Schneider & Sons -- for me the center of the world when it comes to wheat beer. Dinner and the beers were excellent! 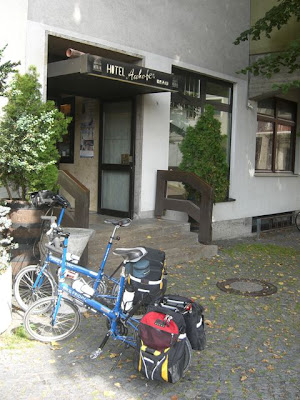 Fridays calling it a day at the Hotel Aukoferbräu 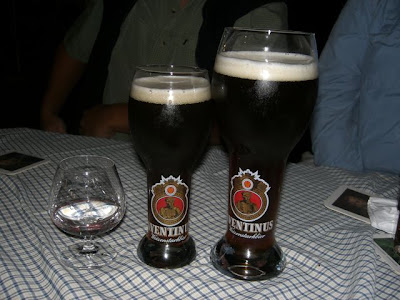