The first order of business on day two was to find another bicycle shop. A phone consultation with Bike Friday gave me some things to have checked. We went to one recommend by a local friend and the mechanic tightened the crank arms and took it for a test ride. He was confused as well, as it didn't make the noise every turn of the crank. Sometimes it would go three for four turns without clicking and then start up again. Sometimes it would do a double click and sometimes a single. He thought it didn't sound like a bottom bracket problem, so I've decided to ride on it this week and have it looked at more thoroughly when I get home. Possibly famous last words!

Leaving the bike shop, we headed north. The normal German thoroughness broke down though -- they are rebuilding a bridge across one of the rivers and the bike path was closed. There was no detours posted (which the usually are, even for bike paths). So we had to backtrack again. But as we have to schedule to keep to, it was just a further nice ride along the river.

We headed for the village of Kemmern, home to the Wagner brewery, one of my favorites. We got there about 11am (most of the breweries open at 9 or 10am, some earlier!) and the first thing we saw was the dreaded "Closed for Vacation" sign. This is getting boring rapidly. My dad was getting hungry (and I was getting thirsty) so we detoured to the next nearest town, that of Breitengüssbach, home to Brauerei Hümmer. They were open! The soup of the day was again Potato Soup, but a totally different texture and flavor. The soup, and a couple bratwurst, washed down with a couple beers fortified us to go on. 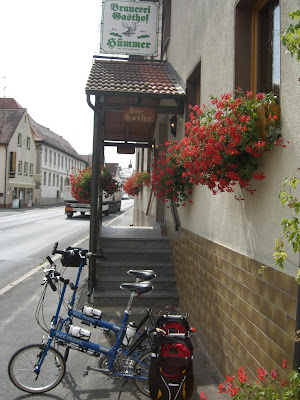 Friday at Brauerei Hümmer. No SUV's to be found

Next stop was the village of Höfen home of Brauerei zum goldenen Adler -- a very small brewery that was highly recommended but that I had never been to. After a nice ride thru corn fields and some woods we arrived -- and found it closed. I had forgotten that it didn't open until 3pm (and it was about 1pm). 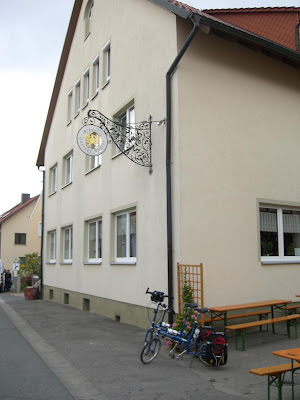 Friday at zum Goldenen Alder, Höfen
Not to worry, up the road about 4 km in Freudeneck was another fine brewery, Brauerei Fischer. You can guess what happend -- we got there and saw the dreaded "Closed for Vacation"
sign. Curses, foiled again. 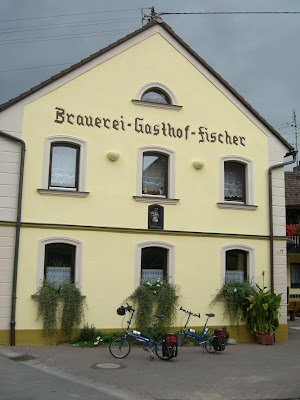 Friday at Brauerei Fischer, Fruedeneck
So we could wait an hour or so for zum Goldenen Alder to open, or head to the next stop in Ebing. We didn't come all this way just to sit, so we headed off (downhill for a change) and rode toward Ebing and Brauerei Schwanen. About 20 minutes later we arrived at the town square and sure enough -- another closed brewery. That was the last straw. We rode to the next train station and took the train back to Bamberg where we knew there were open breweries! Total distance 23 miles.