We made plans to go riding Saturday morning with a friend from Bamberg and a couple of friends just visiting who happened to bring their bikes with them. But the weather did not co-operate -- there was a steady rain. So we walked up the hill to the Cathedral where there was an exhibition celebrating the 1000th anniversary of the Archdiocese of Bamberg (founded 1007 by Emperor Heinrich II). Nothing wrong with a little culture :)

By afternoon, though the weather cleared a bit and we decided to ride to Rossdorf am Forst, home of Brauerei Sauer. This time we rode down the east bank of the Regnitz and turned eastward at the village of Strullendorf. Rossdorf is at the start of the hills known as the Frankische Schweiz (Franconian Switzerland) so it was a bit of an uphill slog on a gravel path.

After our bad luck of closed breweries we were a little worried when it looked deserted as we rode up. But it was open, just empty. After a nice couple of kellerbiers sitting the nice garden, it was time to ride back. Going downhill we took the road instead of the path -- much easier. 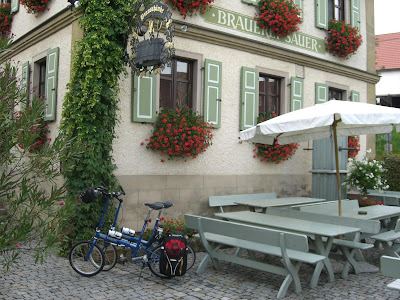 Happy Day! I lived in Rossdorf from 1991-1993 and what a wonderful experience it was. Every Friday night at Brauerei Sauer with the locals. Bamberg is such an awesome city. What a nice rememberence to see your photos. I am from Calif also. Moved from Laguna Beach to Rossdorf. Grew up in the mountains near Tahoe (Pine Grove, Pioneer & Jackson) and now in Houston, TX. Miss all of it!