After a rest on Sunday, were were raring to go for a ride on Monday, but the weather wasn't co-operating. It was most un-summerlike, temps about 50 deg F, dark clouds, wind and on and off rain. But we came to ride so ride we did.

We decided to head west along the Main River Bike Trail. In short order we were in Bischberg but Sonne is closed on Monday and it was a little early for a stop. We continued on to the village of Viereth and Brauerei Mainlust. We were a little chilled so first up was a cup of coffee. A big cup of coffee. After warming up, it was time to try the beer. It had been many years since I'd had a Mainlust beer. After this one I remembered why -- if there were any hops in that beer it would take a microscope to find them. It really tasted like fermented wort. It wasn't bad, just not very interesting to me. 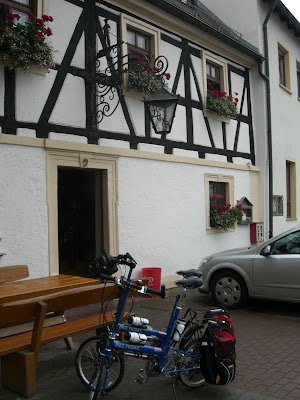 Next we turned inland (and uphill) for a couple kilometers to Weiher and Brauerei Kundmüller. Total climb was about 250 ft -- not too bad but enough to work up a thirst. Kündmuller brews a variety of beers and in the fall their bock is quite nice. Today we had their Rauchbier (Smoked beer). This one was very lightly smoked compared to the ones in Bamberg. Just enough smoke to let you know it was there. We complemented it with a nice bowl of Leberknodelsuppe (Liver dumpling soup -- its better than it sounds!) 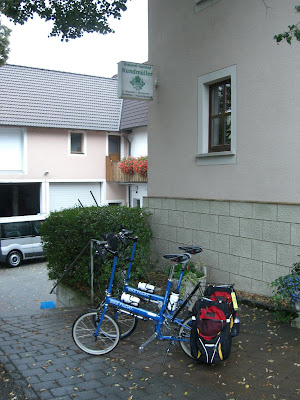 Friday asks "Weiher we here?"
Refreshed, we had a decision: continuing away from the river would would come to Trabelsdorf and Brauerei Beck -- where a good friend is the brewer. But in between was a very steep hill -- the bartender at Kundmuller said about 300 meters (1000ft). We were both willing to give it a try (no witness to see us walk the bikes) until a local told us that Monday was the rest day at Beck. I tried to get my friend Andy (short for Andreas) on the phone, but no luck. Not willing to do such a hill, in the rain with out a beer as a reward, we decided to continue west along the river. Of course we got a nice downhill run to get warmed up.

We did have a small problem -- we were on the south bank of the Main (where the bike train runs) but the next breweries were on the north Bank. Since the bikes don't float to well a bridge was in order. The first bridge was railroad bridge, so we skipped that one. The next was a highway crossing, but luckily there was a bike lane on the sidewalk.

Across the bridge was the village of Unterhaid. A bit east in the neighboring village of Oberhaid was Brauerei Wagner, but I haven't had good luck with their beers in recent times so I didn't think the backtracking was worthwhile. (There are many Wagner breweries in this area, the ones in Kemmern and Merkendorf brew quite nice beers). Turning a corner I saw a sign "Bräu-Gästette Gambrinus" -- I had heard of this place! They claim to be a brewery, but their beers are really brewed in Bamberg by Brauerei Maisel. But it was cold and wet and time for a beer. The beer was quite nice and a bit different than the standard Maisel. I learned later that they have their own recipe. Well worth a stop if you are in the area. Plus a cool logo. 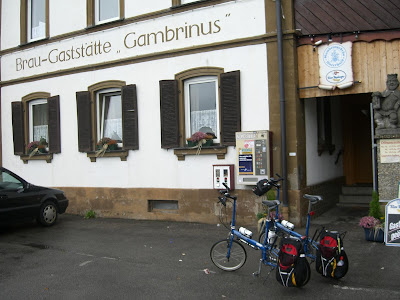 Friday pays respect to the Patron Saint of Brewing 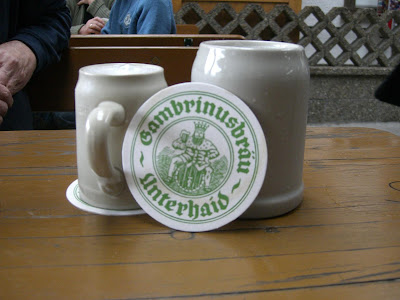 The obligatory beer picture
Back on the road we soon came to Staffelberg and Brauerei Hertlein. Monday is their rest day (which I knew) so we stopped just long enough for a picture and it was on to Stettfeld. 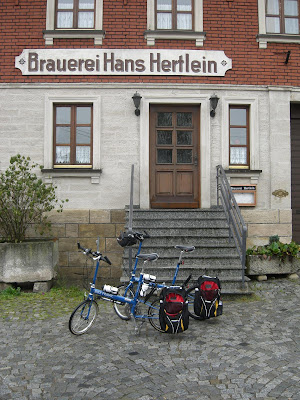 Friday's He(a)rt is broken at a closed brewery

After a particularly rainy and windy section of road, we came to Stettfeld and the home of Schwartzer Adler Bräu. This is one of the most delightful small breweries around. The beer is very good and the main room is just plain cozy. They have "signature" snack "Ham with Egg" that is sort of an omelette with onions and ham. Very tasty, but they only have one pan, so if there is a group of you, you will get them one at a time. 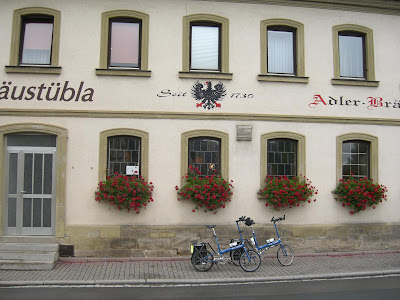 The Eagle soars over Friday
Since the rain was picking up, we rode on to the next town (Ebelsbach) which used to have two breweries (but both have their beers brewed by other breweries) and took the train back to Bamberg. Total Distance: 23 miles.

Hey Fred... Interesting that somehow I find this particular blog of yours after doing a search on folding bikes. I have been planning to do exactly the type of "beer/bike touring" that you are doing and would like to keep in touch on the issue. I am sure we will meet once again in Eizeringen in March (BTW, there will be a shuttle again).

I didn't throw down the "big bucks" for a Bike Friday, but I did get a great deal on the 8 speed Trek F400 that they discontinued. It's actually designed by Trek and made by Dahon. The frame is aluminum so it's definitely not just a re-badged Dahon. It can handle my weight 225 + bags.

I have been riding quite a lot this past year at home in WV. I have a SWB recumbent that I have around 1200 miles on. It's the best form of exercise for me and it's useful (I can get places!).

Stay in touch... If you are planning a group beer-ride, let me know will ya?

Also: Thanks for the Franconia info. I posted a blog on that trip... Here