The bikes survived the airline trip and we put them together Wednesday afternoon, but were so tired we didn't test ride them.

Thursday we decided to ride down the Regnitz bike path. First off, here are the bikes in front of our apartment house (mine is the one with the handlebar bag) 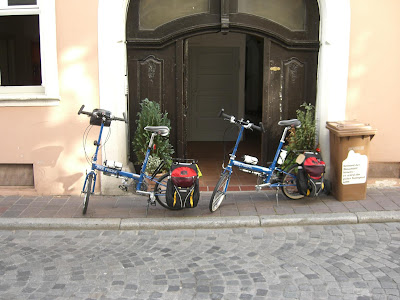 Fridays' Home away from Home

We had few false starts finding the bike path out of town, but were soon on our way, riding along the Regnitz river.

We came to the village of Pettstadt, where there are no current breweries, but a nice beer garden ("bier keller" in the local lingo -- see here for why) but it didn't open until 3pm so it had to wait for another time. We where on the west bank of the river and our first stop was on the east so we needed to cross. There were frequent (if small) signs showing which bike trail went were (this is Germany -- they all have names or numbers like highways :) ). I saw a sign that said "Hirschaid" (where we we going) so we followed it.

We took a turn the right and down a small hill and the bike path literally ran into the river! We must have looked confused because a man up on the bank above us shouted "The ferry will be here soon." We looked across the river and sure enough there was a barge connected to a cable that ran across the river (and pulled the barge back and forth). It slowly crossed the river and then he anchored one end and let the current swing it around so it docked right where the bike path ended ! We paid our € 1 (each) fare and were soon on our way... 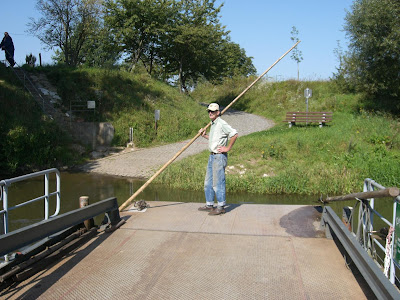 Ferry cross the Regnitz
We leaned later that on weekends (when it is busier) he sells snacks and sodas and water as well. No riverboat gambling, though.

We soon were back on dry land and working our way southward. We soon came to Hischaid and Brauerei Kraus where a stop for beer and lunch was in order... 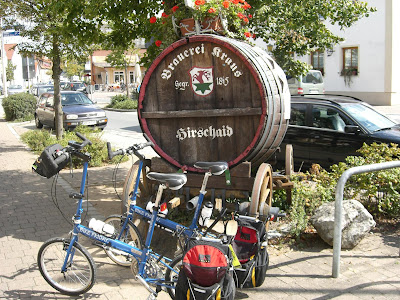 After a nice bowl of Kartoffelsuppe (Potato soup) and Leberkäse (literally "liver chease" but its sort of a meat loaf made that is sliced and served on a roll) we were on our way south.

Our next stop was to be the village of Buttenheim, whose claim to fame in the non beer world is it was the birthplace of Levi Strauss. For the beer world it is known as the home to two breweries that are right next to each other and owned by brothers who reportedly don't speak to each other. My favorite of the two is Löwenbräu (not related to the large Munich brewery of the same name). But when we got there, on the front door was a sign "Closed for Vacation until Sept 28." Damn! So we went next door to the larger Sankt Georgenbräu for some liquid refreshments. 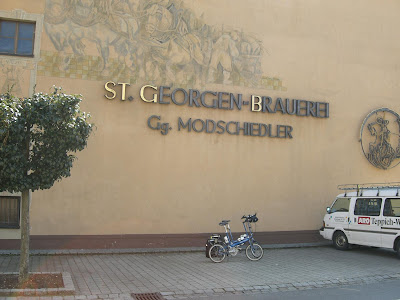 Along the way my bike had started to make an annoying click with no obvious source, so we decided to take the train back to Bamberg and have it looked at at a bike shop I knew.

Well, it turns out that breweries aren't the only business that takes time off in August. The first to bike shops where closed. I found a third that was really more of a rental place. The young man there thought the crank arm had stripped pedal threads. He tightened the pedals down and that helped a bit but the click was still there. We road back home and then proceeded to visit the local breweries on foot. Total distance: 21 miles.
Posted by The Mad Brewer at 7:27 AM