Well, this week I am off with the bike to Bamberg, Germany. While most of you probably haven't heard of it, it really is the Beer Capital of the World. With all due respect to my readers in Oregon (who am I kidding -- my reader in Oregon) there isn't a higher concentration of good beer to be found anywhere. Munich, bah, that is for tourists. And all but one of the breweries are owned by multinationals (Heineken or ImBev) and are not really breweries but rather beer factories.

Bamberg has roughly 70,000 people and 10 breweries! In the surrounding Landkreis (an administrative district in the case about 20 miles in diameter) there are over 80 breweries. And in the "county" of Oberfranken (really a Regierugungsbezirck but who's counting) there are nearly 200.

So watch this space for updates and pictures...

I'll leave you with a picture of beer being served at the Mahr's Bräu brewery in Bamberg -- as it should, gravity fed from a wooden keg. 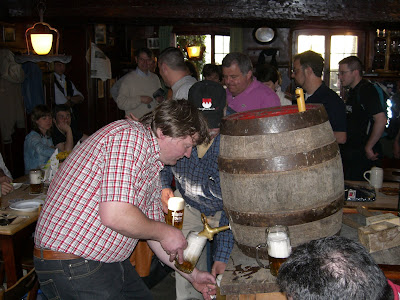