Monday Beer Blogging: Best Beer I've had where I didn't expect it.

Sometimes you run across a great beer when you aren't looking for. Business occasionally takes me to Switzerland. Now the Swiss are famous for many things, but beer is not one of them. Their one internationally famous beer, Samichlaus ended production shortly after the brewer, Hürlimann, was acquired by the international conglomerate Carlsberg. But there is hope. A few regional brewers such as Brauerei Schützengarten in St. Gallen still make decent beers. I am told that the French speaking cantons have many thriving microbreweries and there are even a growing number of microbreweries in the German speaking region. So the next time you are at the World Economic Forum in Davos watch out for beers from the Monsteiner brewery. 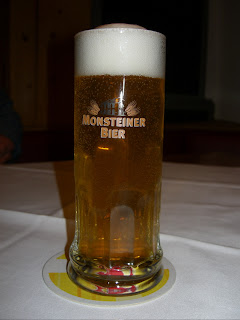 This is the Monsteiner Huus ("house") beer. It is unfiltered (i.e. it is a "live" beer with yeast and hence cloudy) and has a slightly sweet finish that is nicely balanced with the hop bitterness. I first had it at Restaurant Kulm in Wolfgang-Davos where not only is the beer on tap, they us it to make a very nice beer fondue.

Brauerei Monsteiner (which, by the way claims to be the highest brewery in Europe at 1625 meters above sea level) also brews an amber colored beer called Wätterguoge ("salamander") This is brewed with a small amount of malt that was dried over a beechwood fire giving it just a hint of smokiness as well as adding to the darker color. 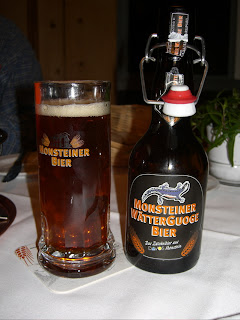 Smoked beers ("rauchbier" in German) are an old tradition that has pretty much died out, except in Franconia (the region around Bamberg, Germany). I mentioned that I found a very good Swiss smoked beer to Robert Pawelczak a brewmaster who teaches brewing in Franconia, he said "of course it's good, the brewer was a student of mine." The world is small.
Posted by The Mad Brewer at 9:04 AM

Email ThisBlogThis!Share to TwitterShare to FacebookShare to Pinterest
Labels: beer

Hate to tell you this:
I'm studying in St. Gallen and Schuetzengarten is by far the worst beer around. They server almost every restaurant in town and boy... you get the worst headache ever the next morning. They recently acquired "Löwengarten" which is much better, but they will probably quit making it soon.