CSA -- Community Supported Agriculture -- is a way people can support local organic farmers. In LA we have the South Central Farmers a not-for-profit group that grew out of a 14 acre community garden in South Central Los Angeles. After the City sold to property to a developer the group leased a farm in the Bakersfield area to grow produce.

On a weekly or bi-weekly basis you can subscribe and receive a box of produce, picked the previous day. There are pickup points all around the city, one of which is Culver City about a 5 mile ride (each way) from my house.

My Doctor says I should "Eat Less Crap" which translates to more fruits and veggies.  So I signed up for a box. Their website said the box would feed a family of four for a week and some of the pictures on the website show some quite large plastic crates -- I was a little worried if the box would fit in the trailer. Not to  worry, it fit nicely 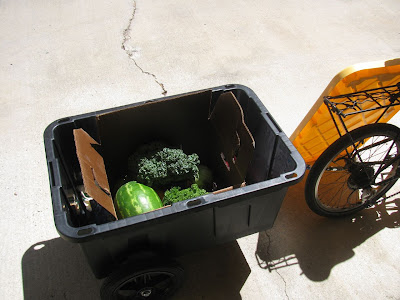 When I got back with my haul I ran into my first problem -- as a "city boy" I had no idea what some the vegetables were! In some cases it was clearly some kind of squash, but I had to prowl the produce department of my local grocery to figure out which kind.

One of the nice things you can do with South Central Farmers is pay extra, which will buy a produce box for a family in need, of which there sadly are too many these days. So this really is a win-win all around: I get some exercise and some healthy food a local family gets healthy food instead of living off of junk food.

So check out Local Harvest and see if there is a CSA in your area.
Posted by The Mad Brewer at 12:56 PM