The morning started off fairly cool -- rain looked possible. The official Danube Bike Path moved inland for a bit before returning to the river. Tim thought the path down the other bank was shorter but it involved a bridge that did have a bike path listed and taking a ferry on the other end. 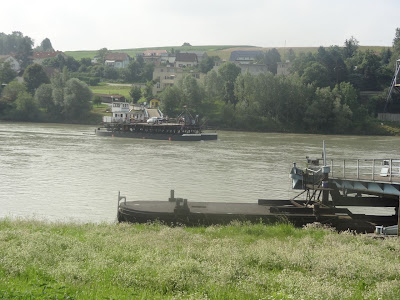 This was one strange looking ferry -- it had superstructure built up, I guess easier to get cars on and off but looked might top heavy. Oh, in case you wondered, the other bank was not shorter.

We made good time until about noon when it started to warm up. We crossed the Danube again with a bike ferry, this time at Mauthausen. This ferry was obviously newer than the others but built pretty much to the same design. 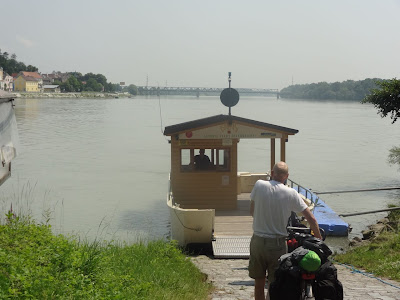 On side benefit is you sometimes get great views of the villages along the river.

We stopped a couple times for re-hydration but both places had Kaiser beer and my one yesterday was enough to last a while.

When we pulled up to the hotel, I noticed they had an Ottakringer sign. This is the last old style brewery remaining in Vienna and I had never tried their beers. Something to look forward to. Oh, the hotel was having a BBQ -- fitting for July 4th.

After making myself suitable for the human world, and went down to the biergarten and ordered an Ottakringer Zwickel.

This was one strange beer. Traditionally, Zwickel beers are not yet completely fermented and so can be a bit sweet. This one tasted if somebody had dumped a boatload of crystal malt in the mash. It just didn't work for me. Nothing "off", just sort of confused.

Next I tried the Ottakringer Helles and this was much nicer. A decent beer with a bit of a fruity note. They also had Stiegl Weizenbier so I had one of those as well.

On the way in we had noticed another hotel with a Trummer Pils sign. I think the were really hoping to close but they let us order a round of Trummer Pils. Now this is a nice beer, the best one I've had in Austria. Soft yet enough hop bitterness to make it a true Pils. So good, that we had another.

We are nearing the end of the journey -- only two more riding days to go.