Sunday started off just a bit cooler, but by midmorning it was hot. It was a shorter day, which was welcome after Saturday's inferno.

Up until lunch time or so it was the same boring riding thru grain fields with no idea there was a major river in the area.

We made good time, so when we got to Vilshofen it was a bit early for lunch, so we just had soup and a couple of beers.

Their wheat beers came highly recommended but we decided to try some of the others. I won't way it was a mistake because the Dunkles Exportbier and Helles Lagerbier were fine, but the Weizenbier was outstanding. We all had that as a second.

I have  a friend, Frank, who lives in Passau. He is an ex-pat Scot, whom I met when visiting Bamberg (We actually met at Adler Bräu in Stettfeld!). I texted him that we were in Vishofen and he said he'd meet us at a riverside Gasthaus along the way.

But first we had to cross the Danube on a little ferry.

The arriving ferry had a couple of cars but ours going back was only bicycles. 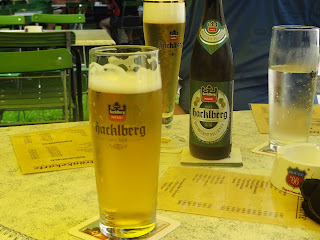 We soon arrived at Gasthof Bauer, about half way between Vilshofen and Passau. As promised, it is right along the Danube. We stopped and ordered beer and soon Frank arrived.

A couple of beers later, it was clear we needed to move on to Passau but it was hard as it was so pleasant along the river. Frank promised an interesting stop along the way, Stelzhof, that specialized in organic beers.

It was up a hill just outside of Passau, but the hill was worth it.


Alas, we had to move on. Along the way we passed the Hacklberg brewery and Frank recommended their biergarten. The brewery was built on the grounds of a former Bishop's palace.


We soon reached our hotel in the Innstadt district of Passau (along the Inn river). Just down the street was the Innstadt brewery, so after re-humanizing ourselves, we walked down for dinner and beer. The dinner was good, the beers not quite so.

Monday is a rest day -- which hopefully means laundry day and Tuesday we cross into Austria. I will be relying on our hotel's WiFi (if it exists) so don't panic if a couple days go by without a post.