Grein is on the north bank of the Danube, as is our next stop Krems, so we had planned on following the bike path on that side, especially as it seemed to be the main one on my map.

As we were checking out, the landlady said we should definitely ride on the South Bank as it was much more scenic and there was less traffic. But we didn't want to backtrack a couple of km to the previous bridge. "Just take the town ferry -- it starts at 9:00am" she said. My map is a couple years old and that ferry wasn't on the map. But sure enough, just down from our hotel was a ferry sign.

There was a bike  shop just down from the hotel and we stopped to borrow their pump to top up our tires. If there was a sound track to this post, it would be playing ominous music. Remember this.

When we arrived the ferry was just leaving, completely packed with bikes and cyclists. There were two people on the dock who hadn't made it on to that ferry. We waited on the bank (where there were benches)

Looking down river you could again see all the hills as the river twists and bends. I just love this sort of view so you get to see another one.

By the time the ferry headed back we decide to go down to the dock as more cyclists started to arrive. 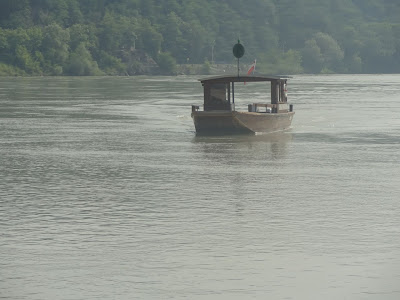 From the middle of the river you got a great view of Grein.

By the time we got across the Danube it as past 9:30 but the sun had already burned away the clouds. It was going to be a hot one.

In what has become our standard practice, we push things a little in the morning and don't stop for lunch until we are pass the halfway mark. The town of Melk was our first choice but about 6 tour boats were docked and it was just too full of people wandering around, so we pushed on,

Finally, just past 1am we came across a Gasthaus and pull in for lunch and a beer. They had a menu of cold dishes for the hot weather which were great. They had four beers on draft, I had a Zwettler Zwickl (say that fast 5 times). It is a Brau Union/Heineken brand so it didn't expect much but it was quite nice in the heat.

After lunch, we pushed on in the heat. Near Bacharnsdorf was a cafe right along the path, so we stopped. While enjoying a cooling beverage there was a loud bang almost like a gunshot but louder. Everybody looked around and finally somebody said, "Look, your rear tire is flat." Oh boy, I just had a blowout.

I check the bike and the tire was damaged as well. No way was I riding on this one. On most trips I carry a spare, folding tire but I had never used it and it was just about the last thing I took out of my suitcase when packing -- for weight and space reasons.

We were about 20 km from Krems, our destination for the day. I inquired about ordering a taxi and the owner, Anna (the place is Anna's Landhaus ) said she was sending somebody near Krems to do some shopping and she'd see if that lady wouldn't mind giving me a ride. She didn't, so Martina drove me directly to a bike shop near Krems, where after a while (they were busy) the replaced my tire (with a slightly larger one but it will do) and fixed a broke spoke I didn't know I had.  There was bit of a crisis as an Irish group with bicycles rented in Regensburg had a major problem the bike shop was helping them talk to the rental company in Regensburg.  So after about and hour and half I rode the last 4km into the hotel, where Tom and Tim had already arrived.

We found a nice restaurant with an fairly rare beer, Hubertus Bräu Herrn Pils so we headed over for beer and dinner.

The beer was wonderful, I'd say tying with the Trummer Pils for the best Austrian beer so far.

The also had bottles Schneider Weisse so I had one with desert to remind me what a wheat beer should taste like.

Tomorrow is the last day of riding, as we will arrive in Vienna.