Day Two -- to Strassgiech and Back

Andreas ("Andy") Gänstaller -- formerly at Beck-Trabelsdorf and Mahrs before that -- has opened his new pub in Strassgiech (Drei Kronen Strassgeiech). The beers are brewed at the form Friedel brewery in Schnaid (Friedel having moved the brewery to the Kreuzberg). The pub is only open Wednesday, Thursday and Friday and doesn't open until 4pm so I needed to kill some time on the way. What to do?

Well, not far out of the way is Cafe Abseits.  I stopped in for a beer or two and a light lunch. I started off with one of my favorites, Mönchambacher Lager

The lunch special was goulash over noodles -- that sounded good.

The "beer of the month" was the new Mönchsambacher Weizenbock. I had to try it.


I was a little sweeter than I like -- I was told that the wheat malt supplier had substituted some French Wheat Malt in place the for usual Franconian and that led to some fermentation problems. I look forward to trying it next year with Franconian Wheat Malt.

I could easily spend the afternoon the Cafe Abseits garden but there were breweries to visit.

The first village you pass thru is Memmelsdorf, home to two breweries, Höhn and Drei Kronen.  I stopped in at Drei Kronen first (leaving Höhn for the way home, if time)

First off, I tried their seasonal beer -- this time a Dinkelweisse (Dinkel is an archaic form a wheat)

It tasted like a typical German wheat beer with just a bit more spiciness. That could be from the yeast but also from the Dinkel. Very refreshing.

Next up was one of their standard beers, the Keller-Pils

I think it was a little less hoppy than in the past. Herr Straub told me his daughter (who recently finished her brewing education) was now mostly brewing the regular beers. I hope she didn't cut down on the hops!

On the way to Strassgiech you pass thru Drosendorf (home of Brauerei Göller) but I took a slight detour -- a couple miles up the road (up -- as in uphill) is Merkendorf, also home to two breweries.

First stop was Brauerei Wagnerm which is one of my favorites.

They have a number of beers on draft, but I had a kellerbier. Actually, it was so good I had two. 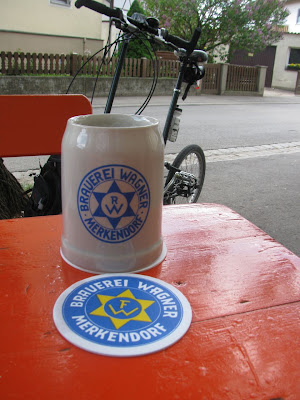 The recently won a silver medal at the European Beer Star competition and were proudly displaying this banner. 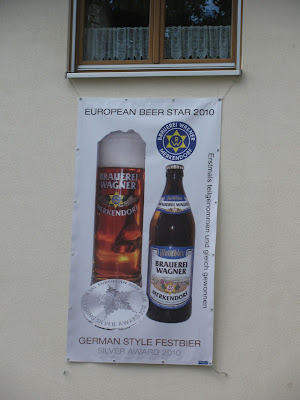 I have to leave you with a picture of the mosaic in the entry way. My initials are FW so I have a particular fondness for this... 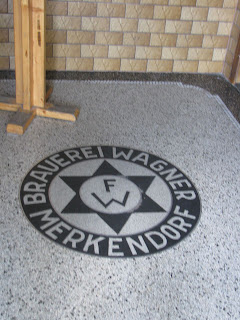 Down the street from Wagner is the other brewery Hummel.

Since I had a bit of a trend going, I started with their kellerbier 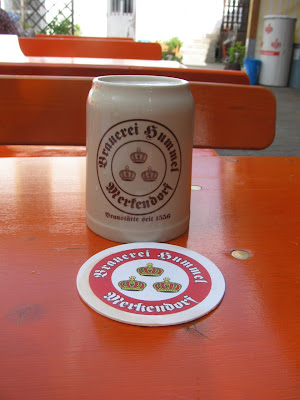 Hoppy and refreshing. Just what I needed for the long (200 meter) ride from Brauerei Wagner.

Then things started to go downhill -- I noticed they had a Maibock on draft. I could pass that up, so I had one. 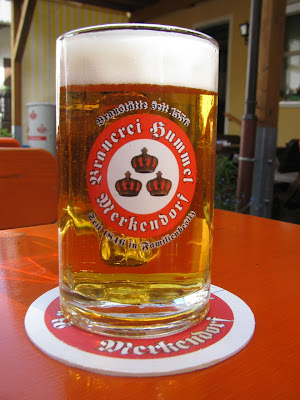 You could spend a while at Hummel -- they had nine beers on draft that day (with probably another nine in the bottles.) 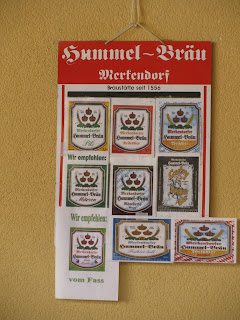 Just stay away from the "Cowboy Schwarzbier" -- it is the only one I've had that I didn't like at all.

The Maibock took me a little longer to drink that I though, so now I was a little late for the 4pm opening. But I soon was there. 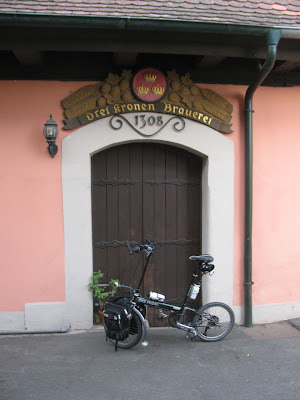 As the brewery is just getting started, Andy only had his kellerbier on draft. 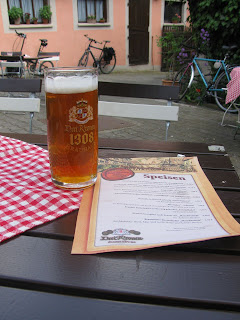 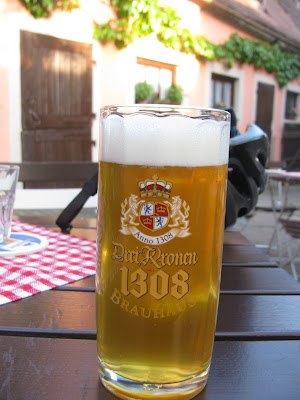 They have a nice garden there, which started to fill up after I took this picture. 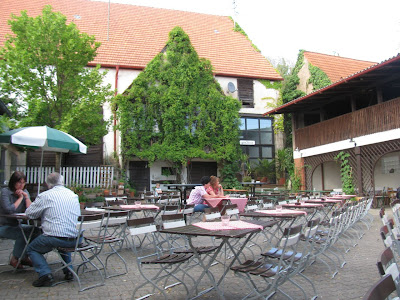 Dinner was one of my favorites they brought along from Trabelsdorf, Schnitzel breaded in spent grains with a beer gravy and fried potatoes. Yum 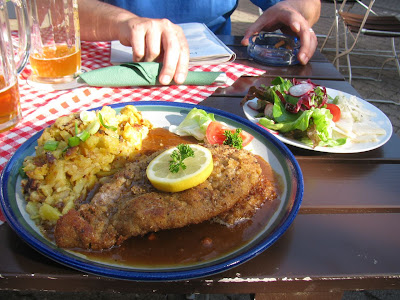 I had lights on my bike but I don't like riding in the dark, so I passed on another beer and headed back to Bamberg.  As I was passing Brauerei Göller in Drosendorf, I realized I had forgotten something very import -- a bit stop. 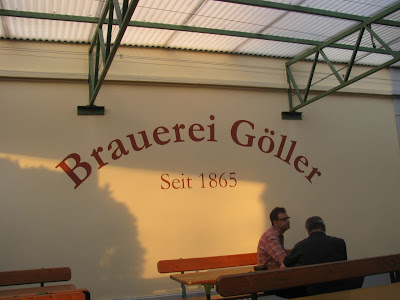 Since I used their facilities, I felt in only fair to have a beer. So I did. 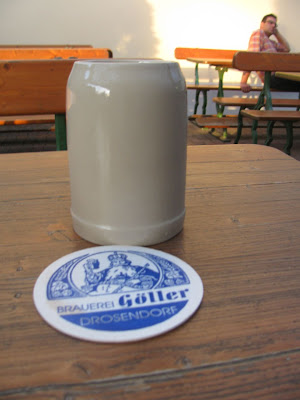 It was a perfectly nice beer, but not quite up to the standards of Merkendorf or Strassgiech.

I continued on to Bamberg and when passed Schlenkerla the open door beckoned. I could not resist. 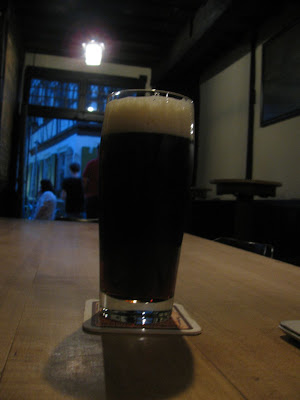 It was a much short ride than Tuesday -- only 20 miles round trip -- but the beer consumption was far higher. Eleven beers, including two bocks and not counting the nightcaps (plural) at Schlenkerla. A hard day but lots of fun.